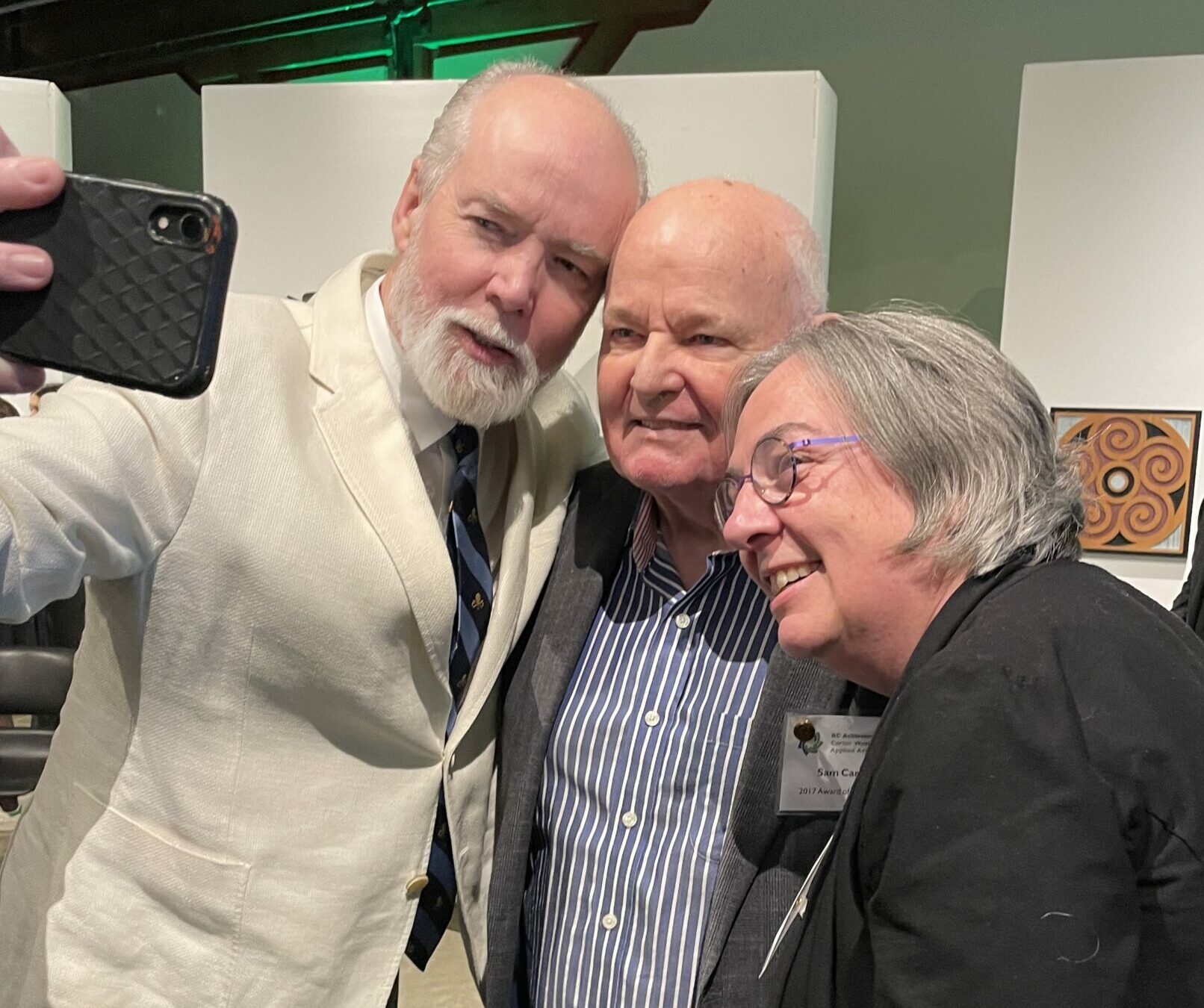 It is timely that we are ending the year on a note of celebration. This year we were able to bring back live award ceremonies where we gathered to honour awardees from four BC Achievement programs. The most recent of which was a celebration of the Indigenous Business Awardees on November 29 – a room filled with over 650 people to honour eight program recipients. Coming together enabled us to appreciate the energy in a fist pump, the connection in a handshake and the warmth in a hug. It also allowed us to welcome this year’s awardees into the BC Achievement alumni family which boasts over 1000 British Columbians strong!

Honouring awardees is a role our small and mighty organization embraces and we do it in concert with so many of you. It’s a testament to the support of community partners, sponsors, nominators, leadership and those of you who share our calls for nomination and our stories of the awardees. So, from our hearts, we thank you. It is with gratitude that we close this year and open the new one with promise of stronger relationships, increased nominations and more stories to elevate and inspire achievement.

If you’re wondering why we do what we do, and the importance of recognizing wonderful people doing incredible things, you just have to ask our former board chair Anne Giardini and our incoming chair Walter Pela about why they choose to represent and support the work of BC Achievement.

“It is a hallmark of successful organizations and societies that they not only recognize achievements but celebrate them. All of us – if we are lucky – have a memory of giving or receiving recognition for an act of creation, collaboration, inspiration or community building. BC Achievement exists to shine light on those whose actions make this province a better place for us all.”

“British Columbia is built by truly remarkable people doing incredible work in varied fields throughout the province. They deserve to be recognized and celebrated, and their achievements amplified, inspiring all of us in our ambitions to make an impact.”

Happy holidays from BC Achievement. Enjoy, stay safe and #nominatenowbc! 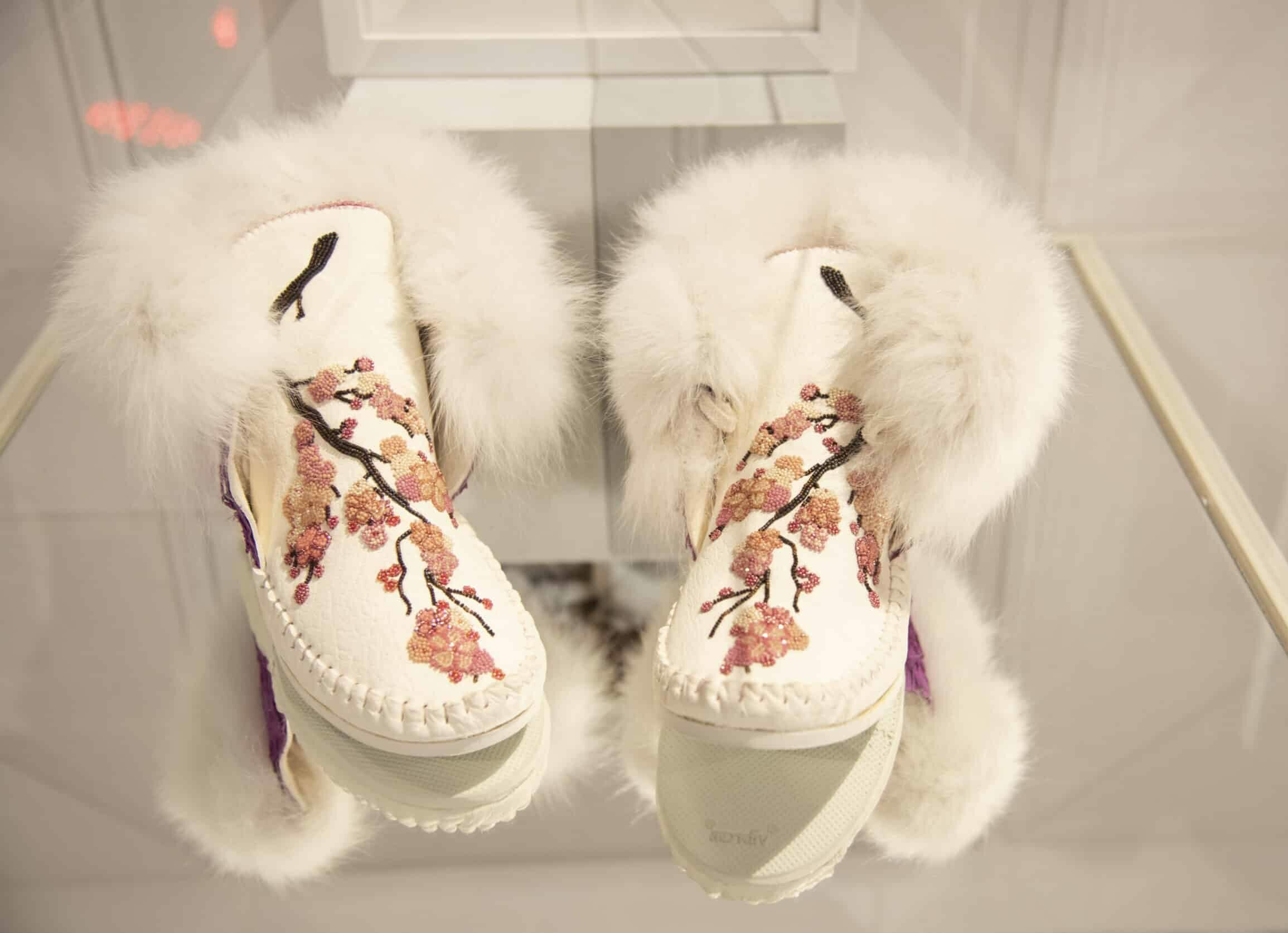 Now is the perfect time of the year to support a local business or artist and surprise a loved one with a gift made with passion and excellence. Check out the artwork from 2022 BC Achievement award alumni:

Reg Davidson – best known for his traditional ceremonial objects, his work can be found in select BC galleries

Caine Heintzman – one of three co-founders of ANDlight, a decorative luminaire design studio and manufacturer to light up your spaces

And there are many more award-winning artists and businesses to check out at bcachievement.com! 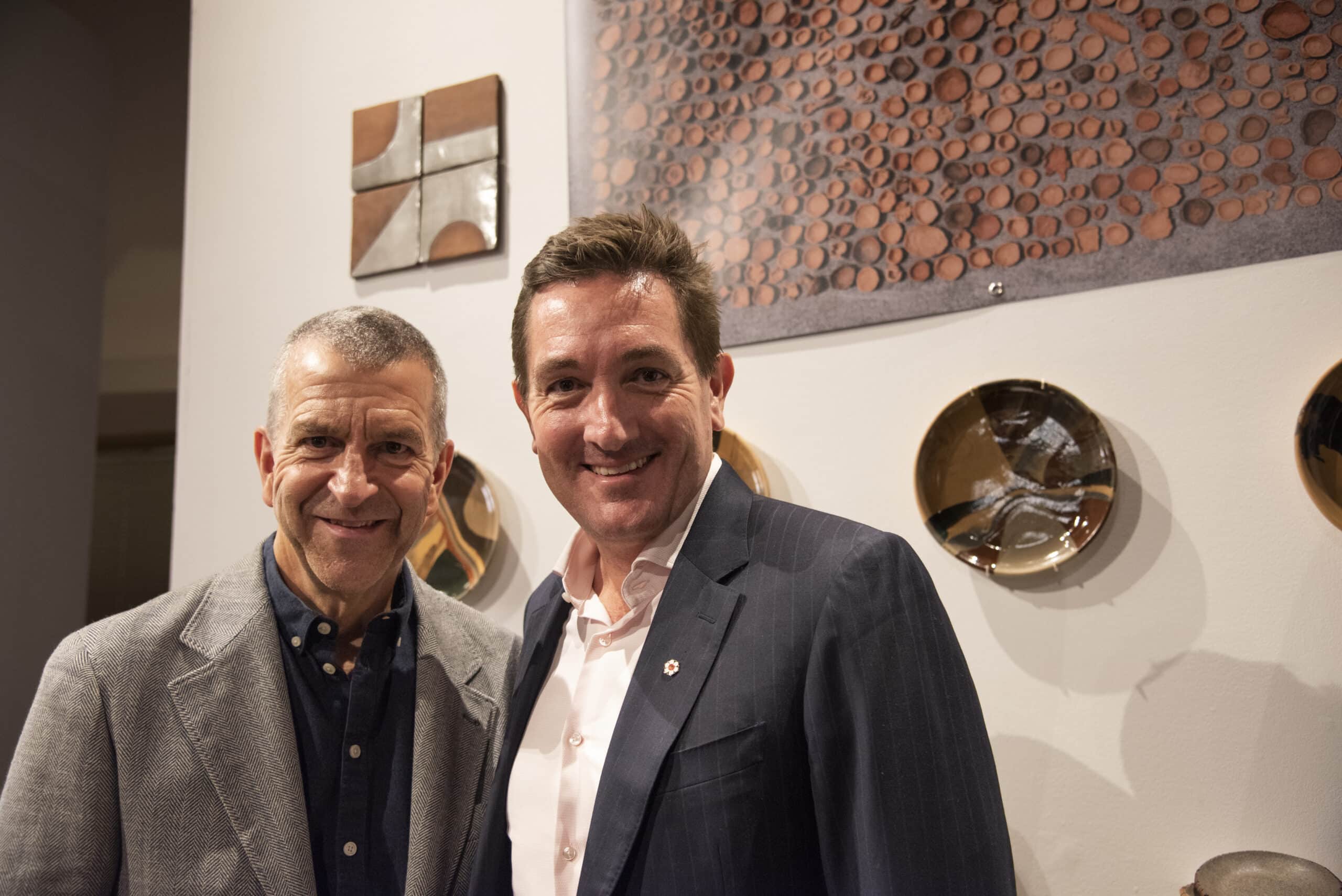 Many of you have asked the question, “What does engagement mean at BC Achievement?” First and foremost, please consider contributing to the work of the foundation in a way that is meaningful for you. Whether that is by:

There’s no shortage of excellence in British Columbia and for close to two decades the foundation has been honouring the best of British Columbia. Every one of these recipients is a conduit for change. The effects of their work rippling outward, building momentum while impacting countless lives.

BC Achievement’s partners are vital to the sustainability of its programs. The work we are doing now builds the foundation for future artists, community leaders and entrepreneurs and we are grateful for those who support this vibrant community and celebrate the best of our province. It is a straightforward equation – the more British Columbians who engage with BC Achievement programming the more our programs can share the success of their awardees and inspire real change.

As an independent, registered not-for-profit, BC Achievement relies upon corporate and philanthropic support for all five of its programs. Every contribution makes a difference, and we invite you to join the movement – #bepartofit and invest in the innovative work of program recipients and, in doing so, inspire achievement.

If you would like to explore contributing to the work of the foundation, please contact our Executive Director Cathryn Wilson at [email protected] 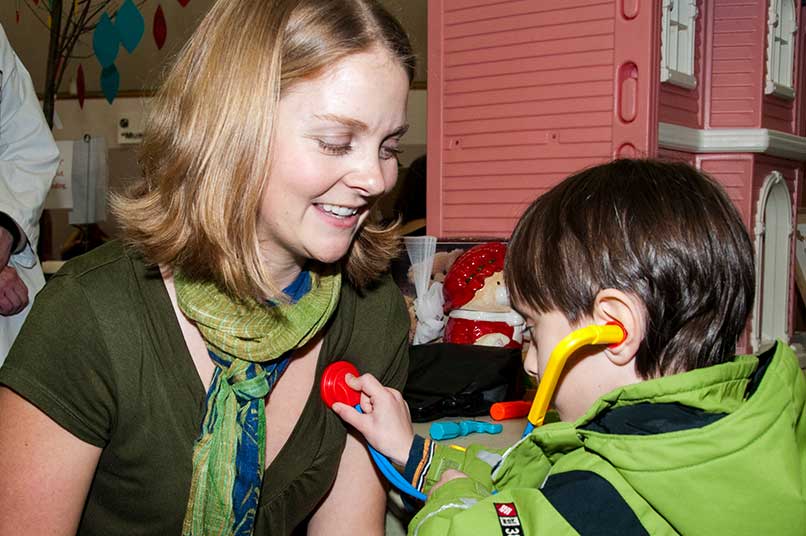 We at BC Achievement believe that our communities are sustained and strengthened by those among us who aspire to excellence. Our vision is to honour and inspire achievement throughout British Columbia. We do this by recognizing, celebrating and supporting outstanding British Columbians and sharing their stories. Every year we are galvanized  by the commitment of program nominees, people from across British Columbia who have taken action, driven by a desire to contribute to their communities.

On December 1st we opened nominations for the Community Award which for the past 20 years has celebrated British Columbians who go above and beyond in their dedication and service to others. It honours individuals who devote their time and energy to making their communities more caring, dynamic, beautiful, healthy and inclusive.

We are honoured each year to shine a light on individuals who have made their communities more livable, sustaining and inclusive.  Just one example of many is 2022 Mitchell Awardee, Dr. Faisal Khosa. At the Community Award ceremony in May 2022, Dr. Khosa commented on his mission-driven sense of service:

“All of us have a mission in life, for some of my friends it is changing the world through serving the homeless; for some, it is feeding the hungry and for some, it is giving voice to those traditionally marginalized and underrepresented. My fellow recipients are endowed with both vision and courage which gives me confidence that solutions to hunger, homelessness, and inequality will no longer be an elusive dream.”

It is this passion and dedication that strengthens communities and deserves recognition. By providing a platform that showcases the excellence that thrives here, the BC Achievement Community Award ignites a movement that captures the best of BC and carves a path forward for others to follow. With every story shared, there is the potential for inspiration to spark elsewhere. It’s this potential and these small sparks that allow hope to rise-up within our province.

Nominations for the 2023 BC Achievement Community Award are open December 1, 2022 until January 31, 2023  #nominatenowbc 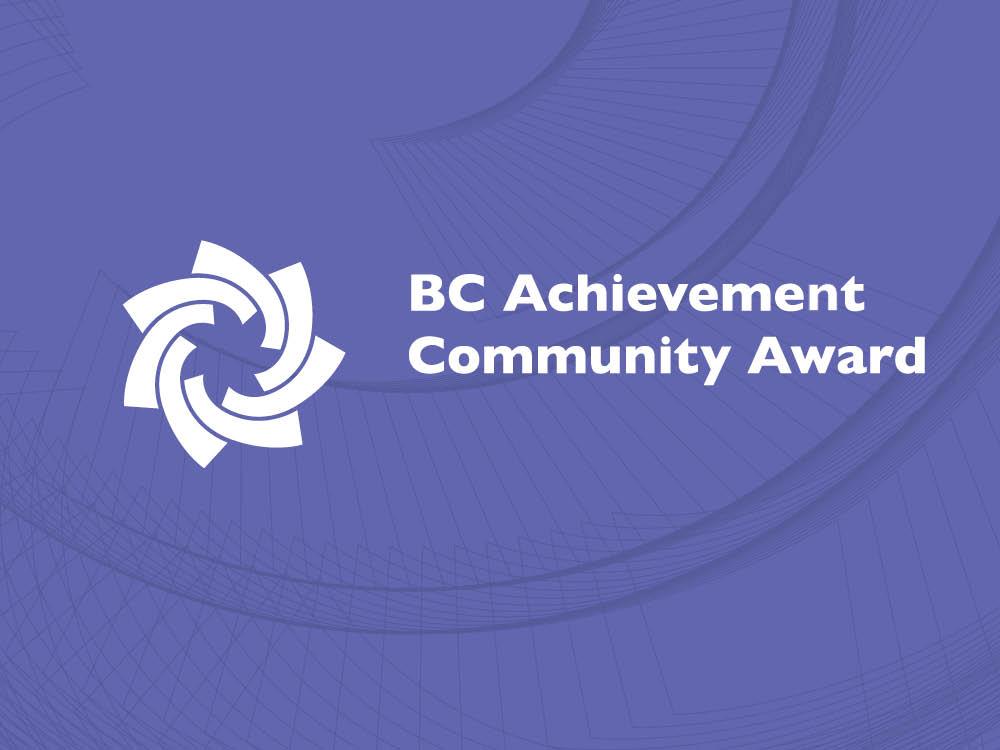 Vancouver, BC (December 1, 2022): The BC Achievement Foundation announced today the opening of the call for nominations for the 20th annual Community Award. The program recognizes British Columbians who have made extraordinary contributions to building better, stronger, and more resilient communities.

“At BC Achievement, we believe that our communities are sustained and strengthened by those among us who aspire to excellence,” said Anne Giardini, OC, OBC, KC, Chair of the BC Achievement Foundation. “Our vision is to honour and inspire achievement throughout British Columbia, and we do this by recognizing, celebrating, and supporting outstanding British Columbians and sharing their stories. Every year, we are newly inspired by the nominees, individuals from across the province who have taken action, driven by a desire to be of service to others. We are honoured each year to shine a light on the individuals who have made their communities more livable, sustaining and inclusive.”

The annual award program recognizes British Columbians who have created positive change in their communities. Individuals are celebrated for their efforts in raising the quality and character of their communities while serving as the ultimate example of dedication and excellence.

“All of us have a mission in life — whether it’s changing the world by serving the homeless, feeding the hungry or giving voice to those who have long been marginalized and underrepresented,” added Dr. Faisal Khosa, the 2022 Mitchell Award of Distinction recipient. “My fellow recipients are endowed with both vision and courage, which gives me confidence that finding solutions to our biggest challenges will no longer be an elusive dream.”

Nominations for the Community Award are now open and can be submitted online until January 31, 2023. Nominations are reviewed by an independent selection committee of community leaders, which include program alumni. For more information, visit www.bcachievement.com.

The 2023 awards will be presented at a formal ceremony in Victoria in May 2023, where the Lieutenant Governor and a representative of the BC Achievement Foundation will bestow awardees with the BC Achievement medallion and lapel pin designed by renowned First Nations artist Robert Davidson, CM, OBC. Awardees will also receive a commemorative certificate and letter from the Premier of BC recognizing their achievements. In addition, BC Achievement curates an online #shinethelightbc social campaign highlighting each awardee’s accomplishments through its channels.

For more information about the BC Achievement Foundation and the Community Award program, please visit www.bcachievement.com.

About BC Achievement
BC Achievement is an independent foundation established in 2003 that celebrates the spirit of excellence in our province and serves to honour the best of British Columbia. By recognizing the accomplishments of our province’s entrepreneurs, artists, community leaders, youth and volunteers, its award programs pay tribute to exceptional people, doing exceptional work. www.bcachievement.com