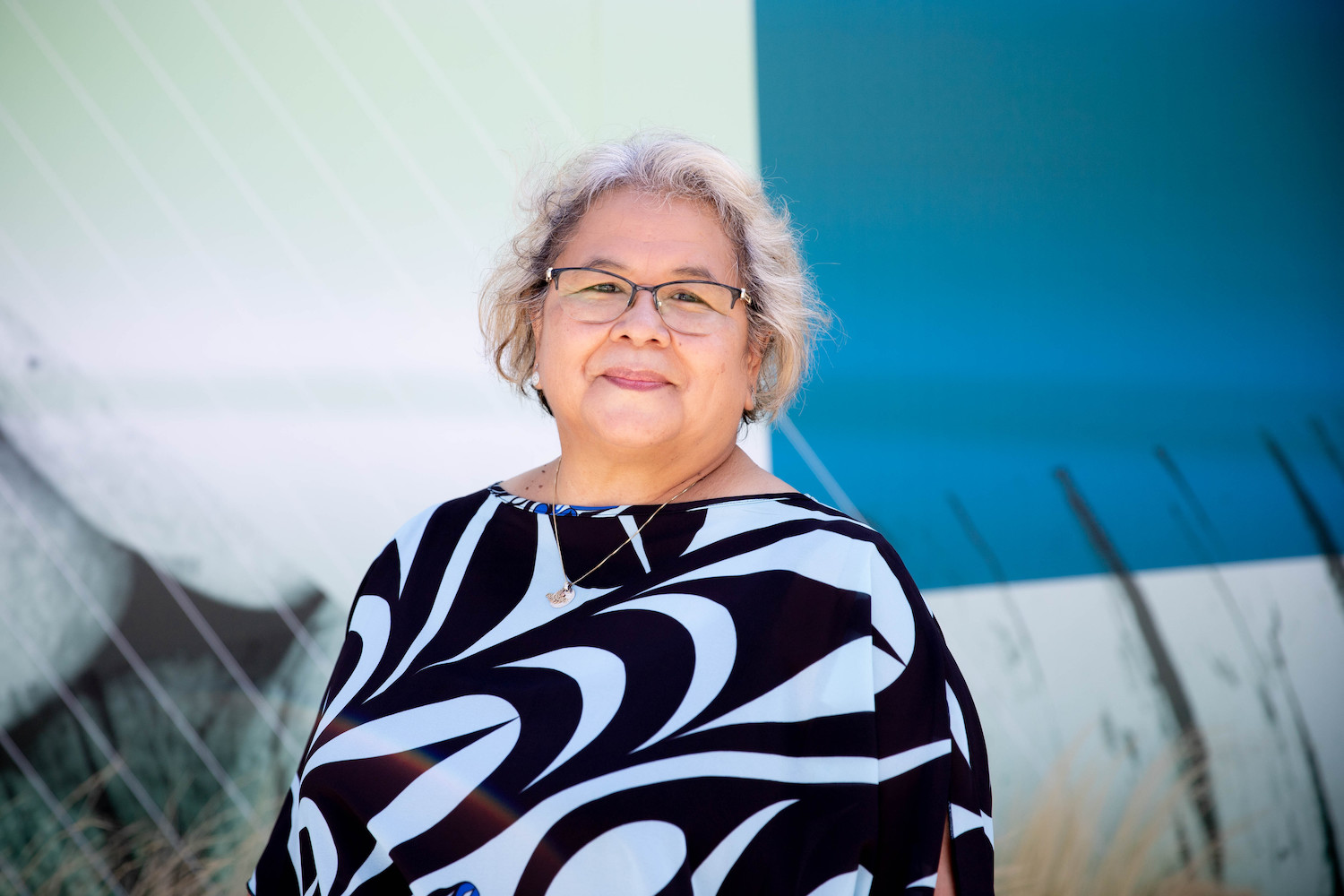 Founded in 1925, Emily Carr University of Art + Design (ECU) is one of B.C.’s oldest universities focusing on education and learning in the arts, media and design.

“I believe her appointment will encourage us to reflect on our responsibilities to this land and to each other and to foster transformation within the university,” says Patrick Christie, president of the school’s alumni association.

Carleen has a history of leadership having served as an educator and former council member for the Tsleil-Waututh Nation. As a former teacher she has worked to educate people about Tsleil-Waututh history and Indigenous issues and has participated in a number of panels and initiatives that support reconciliation and the modernization of institutions.

“I am honoured to have been asked to become the Chancellor of Emily Carr University,” says Ms. Thomas. “I’m passionate about education, as a former teacher and a life-long learner. I look forward to taking on this important role and working with the university’s remarkable students, staff and faculty.”

Congratulations to both ECU and Chancellor Thomas on what promises to be a meaningful opportunity for discussion, engagement and reconciliation. 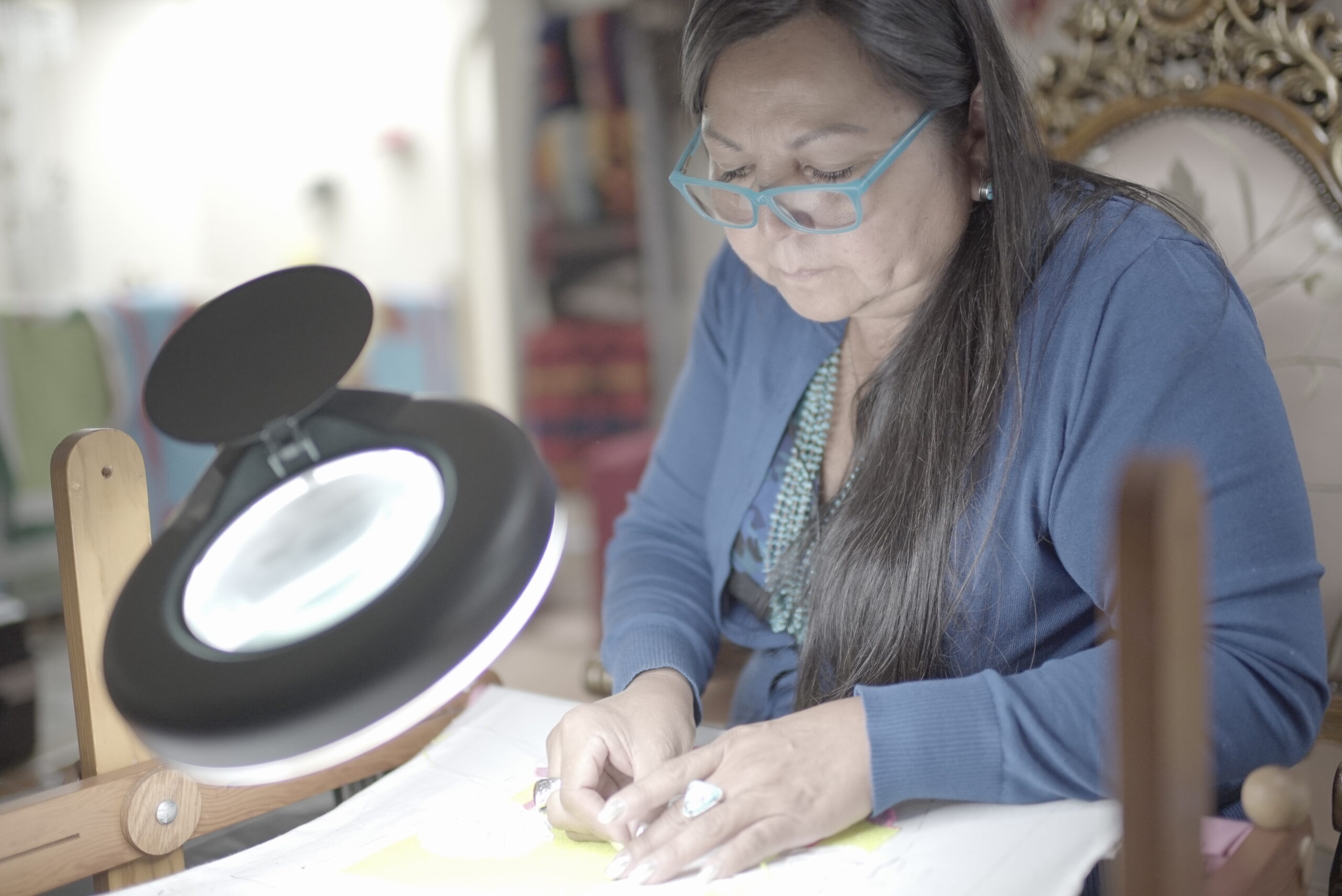 What does it take to tell a story? To make it compelling? To truly reflect the voice of its subject? To inspire others by its message?

Well, a whole lot goes into creating a film that does all of this. BC Achievement has been producing films on its awardees since 2006! There are close to a hundred short films you can peruse through on BC Achievement’s YouTube channel and although their style has evolved over the years, you’ll note that they all have something compelling to say.

In her film, Doreen Manuel, Fulmer Award alumni, draws us in with her retelling of learning to bead from her grandmother. We learn what compelled Indigenous Business Awardee Nicole McLaren from selecting books by Indigenous authors for her book club, to launching a business that shares those books with people around the world. And we are inspired by the magical forest setting of ceramicist and Carter Wosk Award of Distinction alumnus, Gordon Hutchens, where he mixes colour, creates shapes and fires clay into beautiful art.

The film production is itself a work of art and the process begins as soon as the awardees are selected by the independent jury. After contacting the awardees to let them know they have received the award, production goes into high gear. It starts with pre-interviews, securing availability for the shoot and meeting in-person with the awardee to film. Then comes collecting B-roll – images and footage that will supplement the visuals in the film. Finally, the film is edited together, music is selected, graphics are added and voilà, the film is complete. Okay, so not always as smooth as that, but we are very fortunate to work with some very talented filmmakers who make the process pretty seamless.

Everyone has a story. BC Achievement is privileged to be able to capture it and share it for the awardees of the Fulmer Award, the Indigenous Business Award and the Carter Wosk Award of Distinction.

Take some time to watch these films and prepare to learn something new and be inspired! 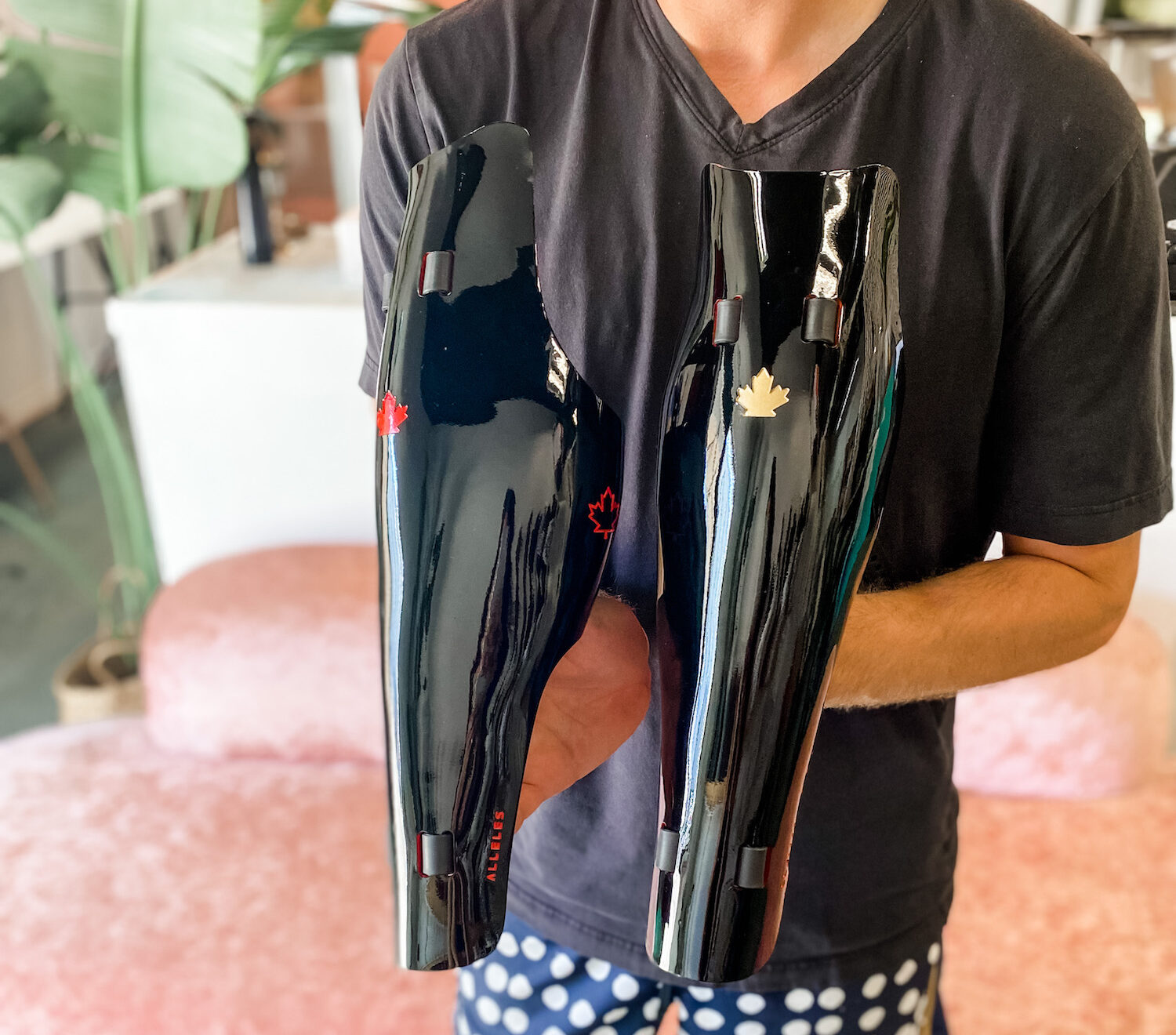 With full on Olympic fever around the world, it’s hard not to watch a favourite sport or a home-town athlete perform at their best. The commitment, endurance, strength and passion of these athletes is inspiring. And there are likely a few of us who have been more motivated than before to run a little further, attempt a somersault or to swim a faster lap.

While the Olympics are exciting to watch, it’s the Paralympic Games running from August 24th – September 5th, we’ll be keeping a close eye on. That’s where we hope to watch inspiring athletes compete at a more challenging level. And this year we’ll be watching for athletes sporting fashion-forward prosthetic covers custom designed for them by Alleles.

Alleles is a Carter Wosk Award in Applied Art + Design alumni from 2019 known for the durable ABS plastic prosthetic leg covers that are lightweight, flexible and modifiable. Owners and designers McCauley Wanner and Ryan Palibroda of Victoria, BC have been busy designing and manufacturing covers for athletes from a wide variety of sports, some of whom we hope to see during the Games.

They are currently working on a set for Canadian rugby player Zak Madell of Alberta, a two-time Paralympian who is scheduled to complete in Wheelchair Rugby this month. Watch for him and others wearing these stylish covers and let us know if you spot designs from these award-winning BC designers at the 2021 Paralympic Games.

To learn more about Alleles check out their profile at bcachievement.com or watch this CBC produced video on YouTube or visit their website at alleles.ca. 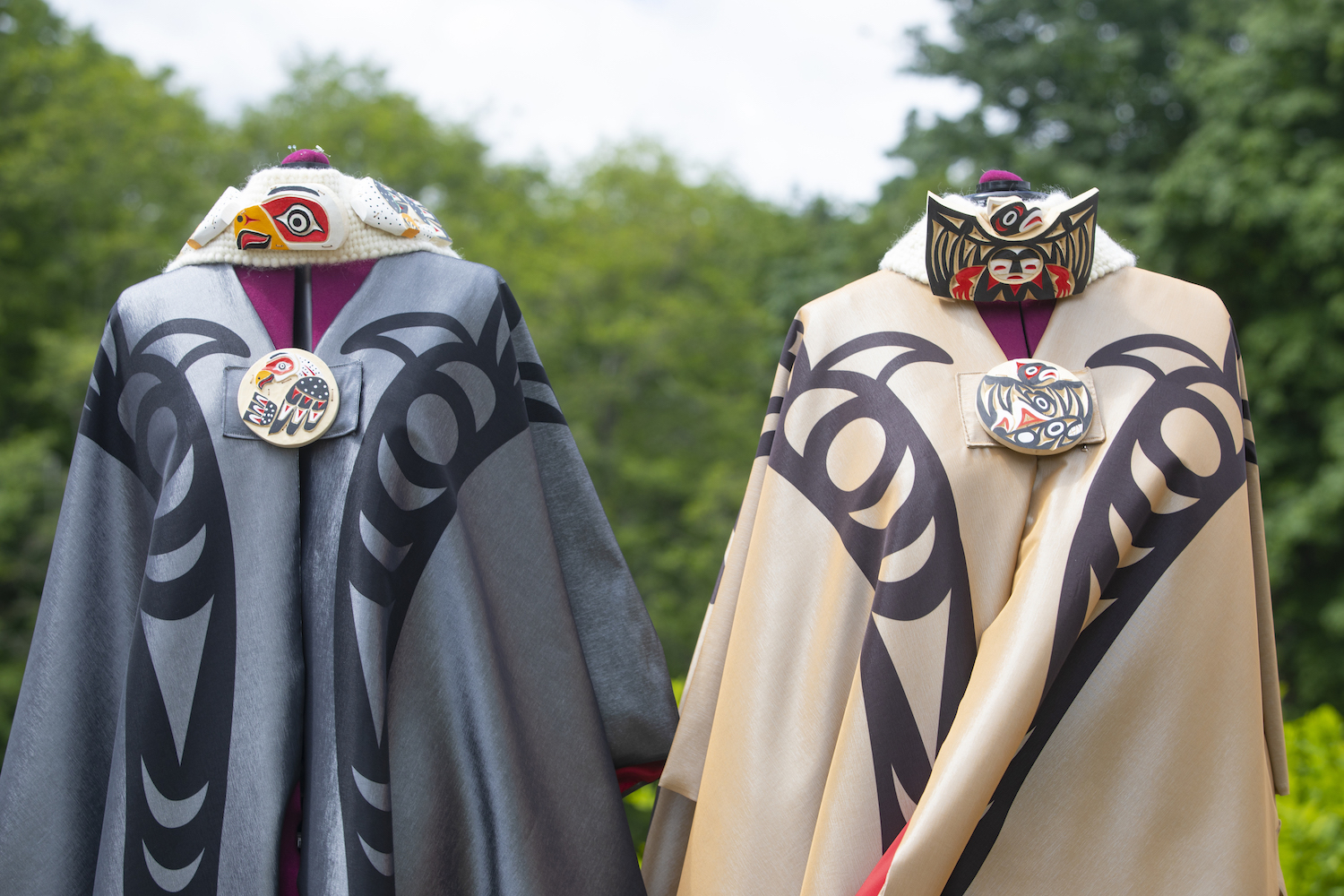 Kekinusuqs, Dr. Judith Sayers was officially sworn in as Vancouver Island University chancellor in June, in a ceremony that paid tribute to VIU’s commitment to reconciliation and reflected the culture of the Coast Salish.

Judith is President of the Nuu-chah-nulth Tribal Council and a long time Indigenous rights and sustainable development advocate. She is also an active board member of the BC Achievement Foundation and has helped develop BC’s first Reconciliation Award, launched less than a year ago by BC Achievement and the Office of the Lieutenant Governor.

The Good family has more connections to the ceremony than just the land they were gathered on. Ay Lelum – The Good House of Design, designed and produced new ceremonial regalia for both Chancellor Sayers and President Saucier. These included a custom cape, headband and frontlet for each.

Ay Lelum, awardees of the Indigenous Business Award in 2018 are sisters, Aunalee Boyd-Good and Sophia Seward-Good and they are a second-generation Coast Salish Design House from Nanaimo.

“These regalia fuse the formality of traditional convocation ceremony robes with beautiful elements of Coast Salish art, culture, history and tradition. It’s an honour and a privilege to be involved in this monumental, historical and ground-breaking project.” said Aunalee.

Ay Lelum design and produce clothing and fabric patterns featuring traditional Coast Salish Art. The regalia design and production was managed by Aunalee and Sophia, lead design was by their mother, Sandra Moorhouse-Good, the frontlets and button fasteners were carved by their father William Good and their brother Joel Good, and the headbands were woven by their niece Thea Harris – making this a true family business.

Congratulations to Judith on her installation as Chancellor of VIU and to Ay Lelum for elevating the ceremonial regalia with their distinctive designs.