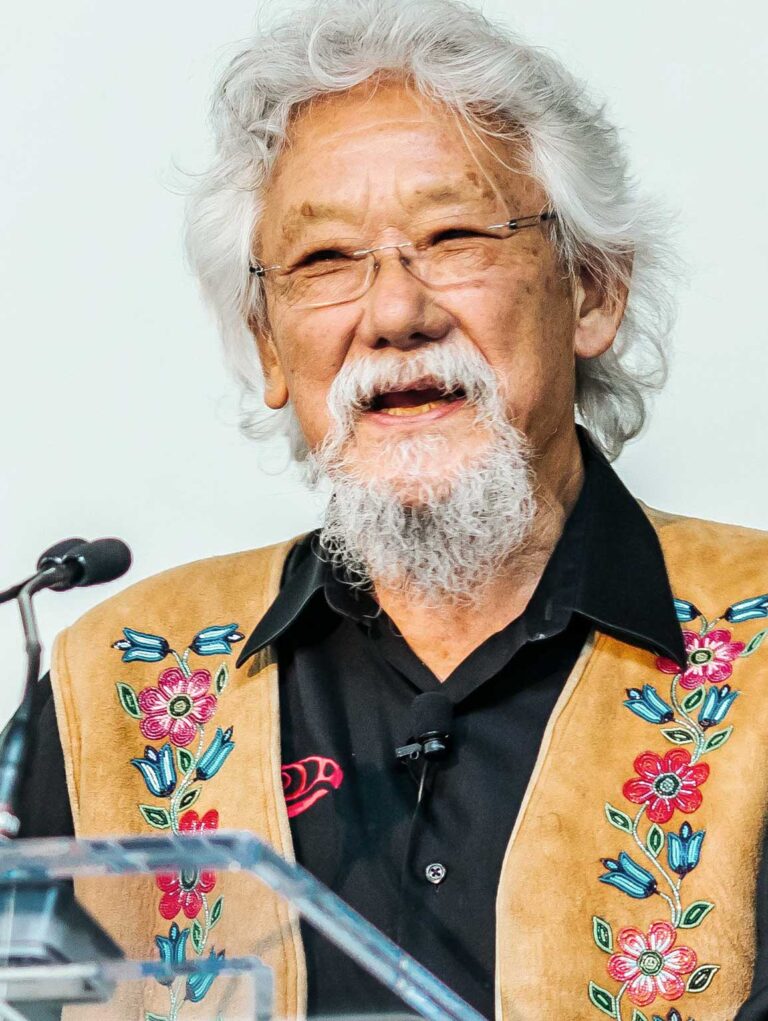 Dr. David Suzuki is a prominent scientist, broadcaster, author, and a world-renowned environmentalist whose lifelong efforts to advance reconciliation have been a central aspect to his work. In his diverse career, he has been a steadfast ally to Indigenous communities, modelled solidarity through his advocacy for the United Nations Declaration on the Rights of Indigenous Peoples, and formed partnerships through shared insights of science and traditional knowledge. David co-founded the David Suzuki Foundation, which helped carve a path for the government-to-government negotiations and relationship that led to the Great Bear Rainforest Agreement. His commitment to Reconciliation has extended beyond Canada on his global travels, including in the Kaiapo of Brazil where he and his wife worked to stop a major dam that would have flooded traditional territory. “I am proud to be awarded with eight names from First Nations in Canada,” shared David, “and one in Australia.”

While David’s storied career exemplifies his commitment to Reconciliation, his personal journey of understanding started decades ago after moving west from London, Ontario. “I knew nothing of Indigenous people through education or personal experience until I moved back to British Columbia in 1963,” he explains. His own experiences with the consequences of racism as a third-generation Canadian had manifested in a strong aversion to prejudice and discrimination, which he witnessed firsthand in the stereotypes frequently portrayed of Indigenous people. While fishing with his father in the BC interior, David became enthralled by the stories and knowledge of the First Nations people he met there, opening his eyes to new perspectives. His understanding and passion of environmentalism and reconciliation formed and evolved together, galvanized by Rachel Carson’s novel, Silent Spring, and further fuelled at an event celebrating the Stein Valley, where he met Ruby Dunstan of the Lytton band and a number of Haida visitors. It was in the late 1970s when David traveled to Haida Gwaii to film the battle over logging for Nature of Things that he met Diane Brown, Miles Richardson and Guujaaw: “Through them, I really understood what the fight for territory meant and the incredibly unjust ways they have been treated under the infamous Indian Act,” David explains. “It opened my eyes to the realization that conventional environmentalism was a shallow understanding that was made far more profound when infused with the ecocentrism of Indigenous people around the globe.” Through his engagements with Indigenous people while filming, and decades of support to those struggling to gain control over their territories, David has always been a student of the journey.

“David Suzuki has been instrumental in helping First Nations,” says BC Reconciliation Award juror T’esóts’en, Patrick Kelly. “The Great Bear Rain Forest project came to be because of his leadership. Amazing synergy came together on the west coast of BC through his foundation and the Coastal First Nation – Great Bear Initiative, whose impact is felt across the world.”

Today, David and his colleagues strive to continue that same learning and commitment in the office. “The weekly staff meetings of the David Suzuki Foundation are opened with an acknowledgement of land that has become a lesson on Indigenous history and values,” he shares, “not only is it informative and educational, staff is moving to a deep understanding of the reason Reconciliation matters.” The team has taken part in Reconciliation sessions with Chief Bobby Joseph’s family, often accompanied by tears from the moving experience. On being honoured with a BC Reconciliation Award, David reflected that, “the award itself is a recognition that reconciliation is an important priority for BC.  It is important for all Canadians to recognize there are individuals and groups for whom Reconciliation is a life commitment.”

David sees Reconciliation as a true recognition and appreciation for Indigenous peoples and their knowledge and culture, fundamentally unique in how it expresses gratitude for nature through ceremony and tradition, while reaffirming the responsibility to protect it. As David looks ahead to the future of reconciliation, he says “communities will be the backbone of a genuinely sustainable future. The high mobility of populations has to change to strong, stable, self-sufficient communities that will be the key to resilience in a changing world. I believe we will learn how Indigenous communities are embedded in place, where elders are held in high regard, where sharing and co-operating have played vital roles under great duress.”

Reconciliation means understanding the long occupation and caring for the land and waters by the original inhabitants. Most important (it's) a recognition and appreciation that Indigenous knowledge and culture are a fundamentally different perspective on our place in the world that expresses gratitude for Nature's abundance and generosity, and through ceremony reaffirms our responsibility to protect Mother Earth.