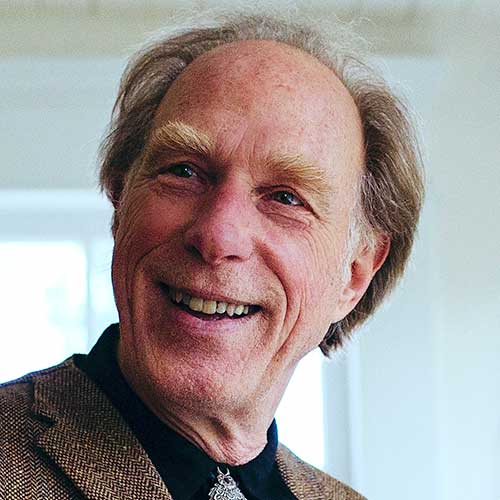 Master luthier Robert Anderson is committed to hand-building musical instruments that are objects of beauty. Constructed with the highest level of craft, Robert’s stringed instruments are designed to be sensitive to the player’s intent, with a sonority which can only be achieved by hand-building.

Robert follows the traditions of the old masters, using carefully selected and aged woods, hide glue and dovetail neck joints. For the best tone, he then French polishes each instrument. Over 25 years of instrument making has deepened his understanding of materials, acoustic design and hand-building methods, resulting in subtle, incremental changes which improve tone, volume and ergonomics.

In an age when cheap, factory-made instruments are overwhelming the market, Robert also instructs and mentors aspiring instrument builders in the tradition of luthiery, keeping alive the spirit of inquiry and skill development fundamental to the craft.

Robert feels fortunate to work in a field where he can create the tools that enable musicians to fully give expression to their art.

In recognition of his extraordinary and sustained accomplishments in Applied Art + Design in BC, Robert was selected to receive the Award of Distinction in 2022 as his achievements exemplify committed vision, innovative enterprise, passionate talent and are an inspiration to the artistic community and province. 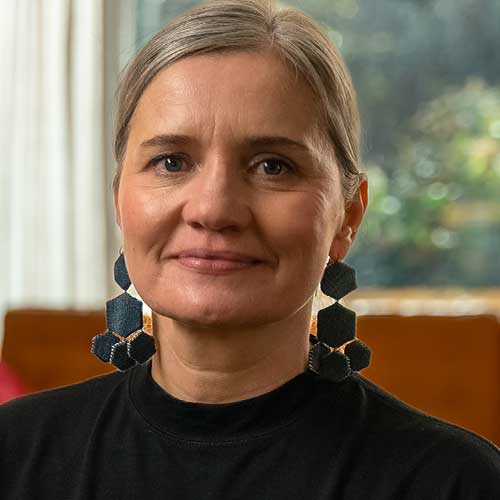 UK born Louise Perrone never intended to become a jeweller or a Canadian. However, three years after visiting Canada she graduated from Alberta College of Art and Design with a Bachelor of Fine Arts in Jewellery and Metals and was awarded the Governor General of Canada’s Academic Medal.

Now, twenty years later, her textile jewellery explores issues of gender, labour, and sustainability by combining goldsmithing traditions with hand-sewing. Using materials derived from domestic and industrial textile and plastic waste, Louise’s work involves altering plastic objects and enveloping them in fabric, inviting a consideration of what jewelry can conceal and reveal about the maker, the wearer, and ourselves.

Louise’s work has been shown in numerous local, national, and international exhibitions, including solo and two-person shows at the Craft Council of BC, and group exhibitions featured in New York City Jewelry Week, JOYA Barcelona, and Athens Jewellery Week.

Louise is passionate about teaching her skills to others and works as an instructor in the Jewellery programs at LaSalle College Vancouver and Vancouver Community College. She’s also motivated to create opportunities for artists to thrive and has given back to her community by serving in leadership positions with various artist and craft organizations. 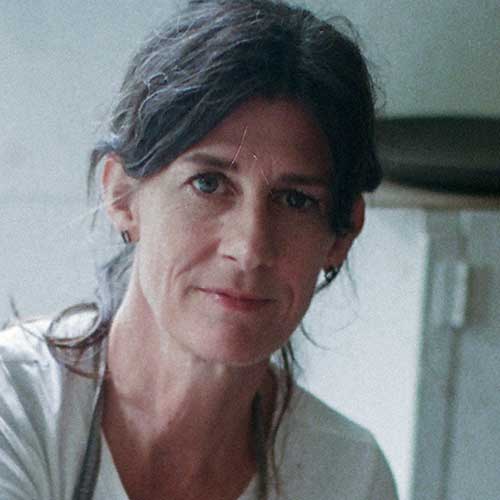 Cathy Terepocki is a ceramicist whose practice is driven by innovation, process and material. She is interested in unconventional processes and crossing boundaries between different industries and artistic practices and so she is consistently researching, developing glazes and new techniques.

Practicing in Fraser Valley, Cathy has immersed herself in the community making connections and creating work that is strongly rooted and reflective of her natural surroundings. Her Chilliwack River Clay series was harvested with shovels and buckets from the local river and her current project includes making tiles from wild clay.

Cathy has had a diverse practice exhibiting, teaching, designing, and producing multiple collections of work, and she has exhibited internationally. The local clay research has opened up opportunities for community engagement and has allowed this ceramicist to create meaningful work and, in turn, contribute to the culture of the place she calls home. 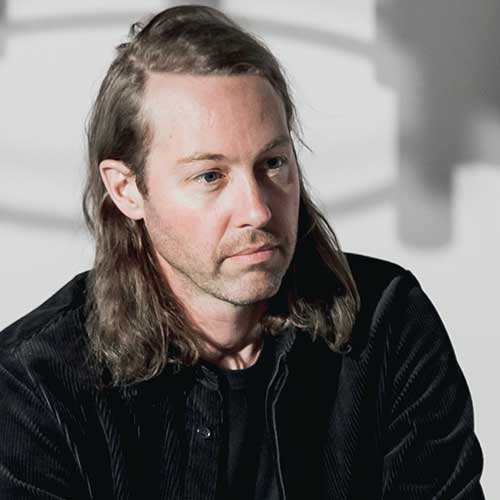 Lighting designer Caine Heintzman has always been curious about the materiality and fabrication of the objects and equipment that allow him to enjoy the natural environment as an outdoors enthusiast. He found himself naturally inclined to industrial design as he’s inspired by ritual and everyday useful objects that help improve people’s lives.

Having studied and trained at Emily Carr University of Art and Design and Kunsthochschule Berlin Weissensee, lighting became one of his very early interests. Caine is now one of three co-founders of ANDlight, a decorative luminaire design studio and manufacturer. He applies rigorous material research, technical know-how and an understanding of lighting technology to an artful practice.

Caine’s lighting designs communicate how functional art objects can become economic commodities as well as affective agents in the circulation and amplification of ideas imbued with cultural meaning.

Borrowing from a philosophy of “design as art,” Caine’s designs enrich the landscape of creative expression emerging from British Columbia.

In 2022, the Judson Beaumont Emerging Artist designation, named in honour of the late BC-based furniture designer, was presented to Caine Heintzman, co-founder of ANDlight, a decorative luminaire design studio and manufacturer 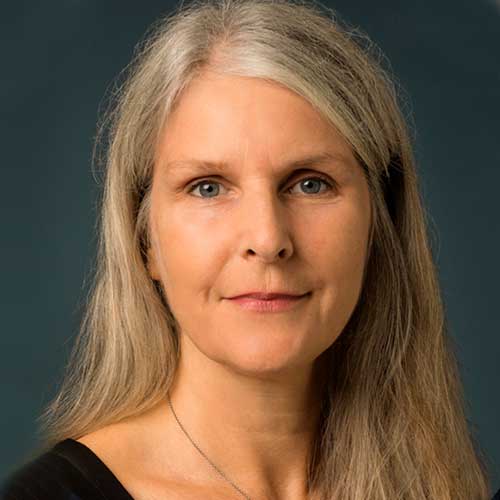 Ann studied figurative sculpture at the Emily Carr University of Art and Design. A former co-owner of Third Dimension Studios, Ann specialized in making life-like recreations for international museums such as the Florida Museum of Natural History, the DNA Learning Center in Cold Springs New York, and the NASA Space Center in Houston, Texas. For 16 years Ann worked as a special make-up effects artist on A-list feature films and television productions and helped create memorable characters such as X-Men’s Mystique. In collaboration with FXSmith Studio in Toronto, Ann helped pioneer silicone filled prosthetics which revolutionized the entire effects industry. She later explored new avenues of her medium by studying forensic facial reconstruction and employed these skills in creating portraits for a Missing Persons Unit.

As an instructor in the Media Arts Department at the Art Institute of Vancouver, Ann introduced real-world sculpture skills to 3-D computer students. In her own art practice, Ann combines her love of figurative sculpture using different materials. Her pieces, which reference art history, prehistory, and popular culture, have been exhibited at Vancouver’s Artropolis, the SAG and the Community Arts Council of Vancouver.

Ann found her passion in anaplastology while visiting a clinic in the U.S. where she learned to make custom breast prosthetics. She later volunteered her skills back home in Vancouver at the BC Cancer Society’s Wig and Breast Prosthetic Bank. More recently, Ann joined the Craniofacial Prosthetic Unit at Sunnybrook Health and Science Centre where she’s taken her lifelong experiences and applied them in a practical way that makes people’s lives better. 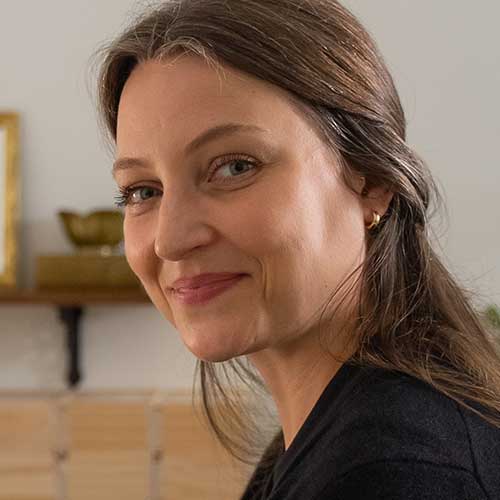 Danielle is a textile artist and designer with over fifteen years of experience creating clothing, accessories, and other soft treasures. Having grown up steeped in nature, the wild and pristine environment of the West Coast instilled in Danielle a devotion to natural beauty, spirituality, and preservation, and a desire to create physical manifestations of these values to share with others.

While studying Industrial Design at Emily Carr University, Danielle focused on sustainability and the challenge of applying it to her growing interest in fashion. Following graduation, she worked in the local industry gaining hands-on experience in responsible production methods resulting in thoughtful, zero-waste “slow fashion”. In 2018, Danielle began her own entrepreneurial practice, Elen Danielle, using old-world techniques and her interpretation of goldwork embroidery to create wearable works of art.

Each of Danielle’s handmade pieces is one-of-a-kind, feather-light, and has a timeless look consistent with her “slow living” design principle. Through her designs, Danielle savours the opportunity to share the healing power of art with those who have invited her into their lives.

Danielle is the 2021 inaugural recipient of Judson Beaumont Emerging Artist designation. The intent of the recognition is to bring awareness to artists who demonstrate excellence in the early phase of their careers. 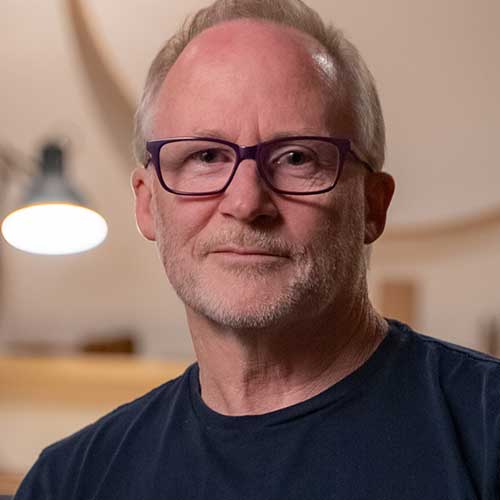 Owner of Nicholas Purcell Furniture, Nicholas’ dedication to his craft is evidenced in the exacting joinery and meticulous attention to detail given to each piece he creates. Both design and quality of making are paramount in the work he produces.

With an early background in painting, woodwork and graphic design Nicholas would later pursue furniture making full time, studying in England under renowned tutor and maker David Charlesworth. Believing in the intrinsic value of good design and the handmade object, Nicholas creates bespoke work for discerning clients as well as exhibition pieces for select galleries and showrooms.

Most recently Nicholas has been experimenting with new materials, forms and techniques and values collaborating with the local community of gifted makers. Nicholas believes in the need to encourage emerging artists to seek out constructive criticism, strive for original design, be thoughtful in the development of concepts and to carefully edit their ideas so that they are producing their best work and can find their own voice in the design community. 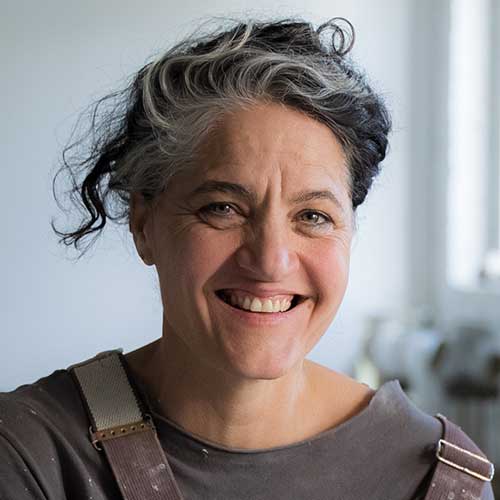 Janaki is a ceramist and founder of Janaki Larsen Studios or as she refers to it Studio of Imperfection. It’s where she creates graceful bowls, plates and vases that reconnect users with the physicality of their world.

Influenced by the Japanese Wabi-Sabi philosophy, Janaki sees her role not to change or control the material but merely to observe it, honour it and coax out its unique essence. While her collections might suggest similarities, each piece is unique, made to be used daily, showing their traces of time and recording their history of use. Janaki is often inspired by a single visual concept – a flash of light across the wall, the colours along the decaying edge of a leaf – and her passion lies in producing functional objects imperfect in nature.

Janaki has collaborated with world-renowned chefs to bring their vision to life and had her work featured in major publications. She is also the mastermind and co-owner of the beloved Vancouver coffee shop – Le Marché St. George. Under Janaki’s creative direction Le Marché has become the launchpad for multiple artisans and entrepreneurs. 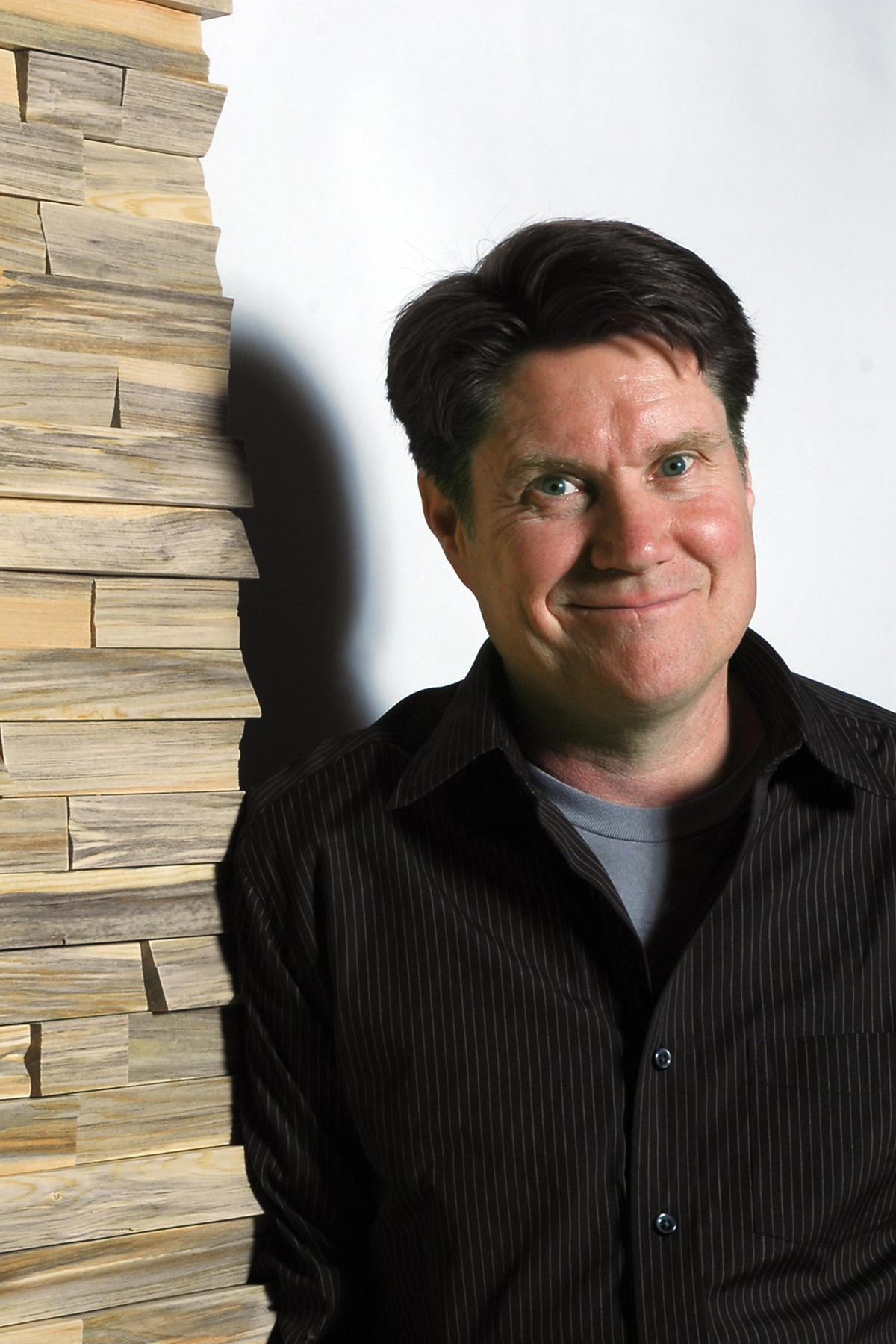 Inspired by kids and their liberal acceptance of the bizarre, Beaumont is widely known for creating whimsical, imaginative and masterful furniture pieces. Beaumont graduated from the 3-D department of the Emily Carr Institute of Art and Design (ECU) in 1985, and since then has been producing one of-a-kind, interactive designs from his custom design studio, Straight Line Designs Inc.  His company has completed unique design projects and installations throughout North America and around the world, including pieces for children’s hospitals, museums, libraries, Disney cruise ships and various exhibitions. His most recent initiative centres around his designs and products using wood from B.C.’s mountain pine beetle forests, thus taking an under-utilized raw material and creating beautiful and unique value-added wood pieces.