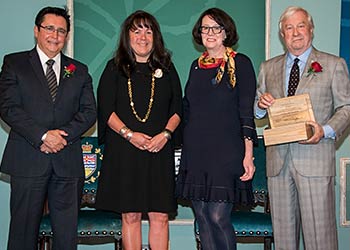 West Vancouver, British Columbia
Kim van der Woerd is a member of the ‘Namgis First Nation and demonstrates exceptional leadership both professionally and personally. As a Board member of the YWCA Metro Vancouver and more recently, the YWCA Canada, she inspired a commitment to reconciliation in the board’s strategic plan that will define advocacy efforts for years to come. Kim’s volunteer work has contributed to progress on a multitude of issues: the full engagement of Indigenous peoples in economy and society, women’s health and reproductive rights, the mentorship of young Indigenous professionals, and support for women’s equality. She serves on various boards and is the founder and operator of Reciprocal Consulting.

Kim van der Woerd was named the 2018 Mitchell Award recipient. Named in honour of Keith Mitchell QC, the Mitchell Award recognizes an individual who, through his or her work and volunteer activities, has demonstrated an exceptional commitment to elevating the community in which they live, and those who serve it. The recipient has a unique and selfless leadership style that encourages and inspires the full participation of those he or she leads. Keith Mitchell served as the BC Achievement Foundation’s Founding Chair and guiding light for 13 years. A leader by example and a mentor at heart, Keith brought clarity to the role of the Foundation in its mission to celebrate excellence in British Columbia.