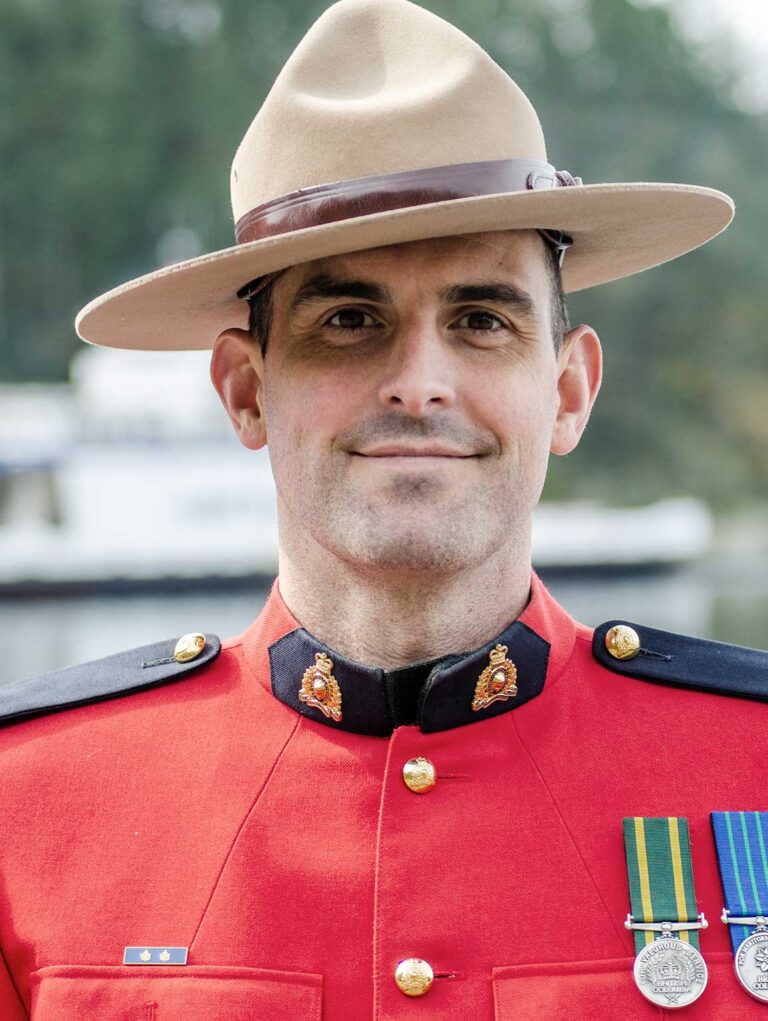 To Corporal Christopher Voller, Reconciliation does not have a succinct definition. It must be redefined and adapted to each person, community, and circumstance. Throughout his career with the Royal Canadian Mounted Police (RCMP), Chris has been keenly aware of why the RCMP needs to build, or re-build, trust with many communities. He does not shy away from that challenge of addressing the role the agency played in this; as Chris explains: “We existed as an enforcement agency when the Government created policies that forcefully removed children from their families in order to place them in schooling systems that saw them lose their sense of personal and cultural identity.”

While Chris was introduced to the concepts of Reconciliation in his training at Depot, the Regina-based RCMP training facility, he recognized that Reconciliation could not become meaningful until employed into action. Chris sought out postings where he could work with Indigenous communities, intent on having a positive impact. Working throughout Canada, Chris recognized contributing to Reconciliation requires explicit acknowledgement of colonization, forceful relocations, residential schools, and other traumas that have touched individual lives and communities. “Acknowledging our roles,” Chris says, “and the piercing, multigenerational effects of those roles, coupled with continued socioeconomic disadvantages, needs to be understood. This acknowledgment is key to make meaningful strides in working towards what is broadly fit in the overarching term of ‘Reconciliation’. The outcome of that, in my world, translates to an ability to deliver a culturally safe and culturally competent service standard while providing policing to the individuals who make up the communities we serve.”

Chris is in his fifth posting in a fourteen-year period, having served nine of those years in what can be described as isolated posts. He perceives Canada as his “community”, as his work can take him to any corner of it. His primary efforts are in building relationships wherever he is serving, but he also makes effort to have these translate to regional, provincial, and federal levels. “My community,” Chris says, “needs to be, and should be, every community I can effect.” Chris is incredibly proud to have walked alongside and learned from great leaders and knowledge keepers. He recalls with overwhelming emotion being invited to dance at a potlach held by the Nakwaxda’xw hereditary Chief. During the dance, Chris wore a combination of his police uniform and the regalia of the Chief, a strikingly beautiful vest adorned with a grizzly bear and family copper; the Chief, in turn, wore pieces of Chris’ uniform. Standing side-by-side before the gathered guests, the Chief hugged Chris and addressed him as brother.  “He’s one of several leaders with whom I’ve formed a connection that will last a lifetime,” Chris remarks. To the many guests visiting from other communities, this demonstrated a respect for one another that many had yet to see. “It was a privilege knowing I was so welcomed,” Chris says, “especially within a cultural event that we, in the history of my organization, had once helped to ban.”

Chris hopes the BC Reconciliation Award will help draw attention to the continued need for education, motivation, inspiration, and, most importantly, innovation. The more others know about existing partnerships and approaches, the more others can evaluate if these could be enacted for the unique needs of their businesses, communities, and relationships. He wants to give hope for those who continue to feel the negative effects of colonization, to know the efforts of Chris and his partners continue every day.

“Chris’ impact is remarkable,” says BC Reconciliation Award juror T,lalisam, Dr. Kim van der Woerd. “He knew the history and came in to build relationships with humility while identifying community needs. His actions demonstrate individual and community Reconciliation.” Chris understands the legacy of his uniform: “For those of us serving now,” Chris says, “we cannot change what took place. [However,] we would be just as guilty… to make omissions in any circumstance where a face-to-face apology can be had, or an acknowledgment of the wrongs can be given to a survivor or their families. Few organizations face the history that mine does. It’s crucial that people know so many of us are trying, that we know we need to focus efforts to this area, and that a large number of us genuinely care and want to be a part of this work.”

For those just starting a journey of Reconciliation, Chris emphasizes the deeply powerful experience of this work: knowledge and perspective of resiliency and history; capability for forgiveness; the strength of a sense of community, and just how large hearts can be. Its emotional magnitude forces personal and professional growth. The journey is toward a shared goal of a respectful and safer tomorrow for all, irrespective on whether they be visitors or the original inhabitants within their traditional territories. “Our goals should never be to simply meet a standard,” Chris says, “our obligation rather should be to set that standard higher each day.”