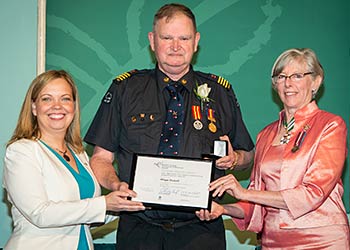 For Port Alice, Wayne Beckett is willing to do anything necessary to make his community a better place. Of particular note is his dedication to the volunteer Fire Department. For over forty years, Wayne has been on duty 24-7, 365 days a year. As well, Wayne served the Port Alice Marine Search and Rescue Society for 18 years and has been a devoted member of the Royal Canadian Legion Port Alice Branch. Whether it is a parade, Remembrance Day activities, Scouts, special events, Community Christmas parties, Wayne is always there. Every community needs a Wayne Beckett. 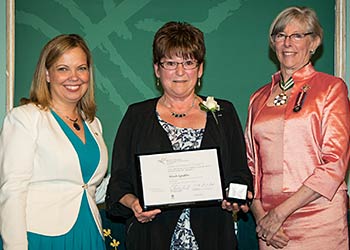 On behalf of the 580 residents of Sointula on Malcolm Island, between Northern Vancouver Island and the Mainland, we recognize Wanda for all of her many contributions to her community’s cultural, social and economic well-being. A founder of the Sointula Recreation Association, she served as its President for over four decades, overseeing the acquisition of its seven community buildings and its programs. Wanda has served on many committees including the Sointula Co-op Store Board and the Malcolm Island Local Services Management Committee. The message is clear…in Sointula…you go to Wanda to get things done. 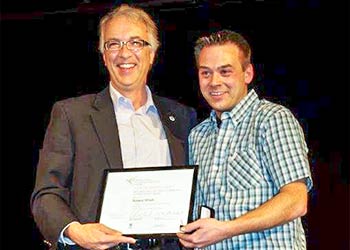 photo: Hon. John Rustad, MLA for Nechako Lakes presented a 2015 BC Community Achievement Award to Vanderhoof resident, Richard Wruth. Richard Wurth is honoured for his overwhelming commitment to the youth and children of Vanderhoof. As we all know, Richard is responsible for founding, building and growing Vanderhoof Children’s Theatre. In 22 years, Richard has worked with over 1,000 children from grades 2-12 directing over 30 productions. No one is ever turned away. He is involved with every aspect of the theatre including overseeing approximately 100 volunteers per production, fundraising, ticket sales, rehearsals, costume creation and props; Each production takes a minimum of 400 hours of Richard’s volunteer time. Richard continues to expand the theatre including leading a group of 28 students to Disneyland for theatre workshops. Richard is a community achiever for which all British Columbia is proud. 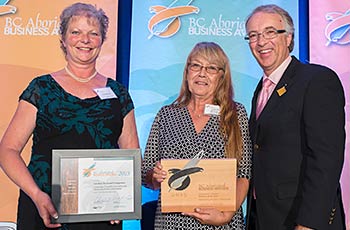 One hundred percent owned and operated by the Akisqnuk First Nation and located on Lake Windermere is the Columbia Valley’s largest lakeshore campground, featuring 77 serviced and 72 non-serviced campsites. The newly constructed Legacy Hall enables the campground resort to hold cultural events, concerts, weddings, and family reunions, increasing its income and spreading the word about their culture. 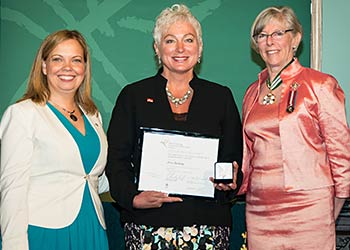 For 28 years, Anne has been the driving force behind the growth of Vancouver Adaptive Snow Sports. This organization enables those with disabilities to experience skiing and boarding at Seymour, Cypress and Grouse Mountains. Anne’s contributions cannot be underestimated. She has given over 25,000 lesson, certified instructors, created an adaptive race program and fundraised tirelessly. Her success can be summed up by Canadian Olympian Steve Podborski who wrote “Anne has created a place for those who have lost so much, enabling them to fly and play and learn and enjoy our great Canadian winter”. 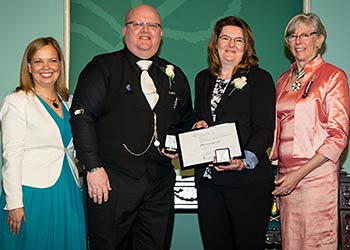 Since 1993, Darren and Beth have reached over one hundred thousand junior and senior students, teachers, parents, and law enforcement with the objective of making youth aware of the perks and pitfalls of living online everyday. Through their company, Personal Protection Systems, they present programs about internet and social media safety. They also respond to individual young people who are facing cyber bulling or other online issues. With their exceptional knowledge of technologies and a gift of communication, Beth and Darren are powerful resources for youth and their parents in the internet age. 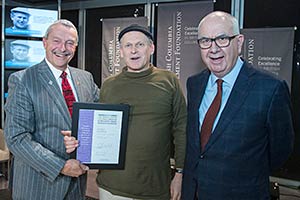 Alastair Heseltine was born in England where he researched and trained in traditional basketmaking using willow. During the 1990s, Alastair planted willows on Hornby Island, establishing himself in Canada as a producer of articles for home and garden. Through adapting traditional patterns he gradually developed a practice of experimental weaving incorporating other materials into what has become a varied repertoire of woven work, not only the utilitarian, but also the ornamental, sculpture, installations, and community projects. 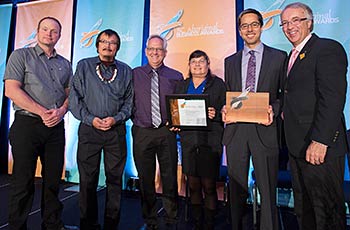 Serving a diverse client group in both the private and public sectors, the Lower Nicola Indian Band / LNB Construction Inc. joint venture was formed to offer a quality team for construction projects in the mining, earthworks and forestry sectors in the BC interior. The 50/50 partnership merges LNIB’s experience in the forestry sector with LNB’s expertise in the earthworks industry. The joint venture has successfully completed four major projects in the Nicola Valley and continues to grow. LNIB continues to train and develop community members for the future. 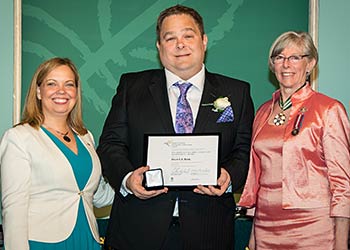 Howard Blank uses his talents as a superb auctioneer raise funds for charity initiatives in our Province. Howard has a way of telling a story and motivating an audience. Over the past thirty years, Howard has helped raise over one hundred million dollars benefitting organizations such as Coast Mental Health, Variety, Canuck Place, Honour House, BC Children’s Hospital Foundation and the Greater Vancouver Jewish Community. Exceedingly generous with his time not only as an auctioneer but also as a community board member, Howard is passionate about philanthropy and community well-being for British Columbians.