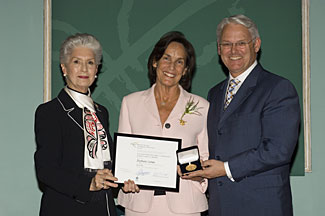 Stephanie Carlson is a community leader who embraces community service wholeheartedly. She brings her energy and time, her care and imagination to organizations serving the needs of children, women and families. Stephanie has a long and active association with the BC Children’s Hospital and its Foundation serving on committees and in leadership roles. She has also been actively involved in the Pacific Riding for the Disabled and the Avalon Women’s Centres. She currently serves as Co- Chair of the 2006 United Way of Lower Mainland Community Campaign. For Stephanie, active participation in the priorities of her community are both a responsibility and a privilege. 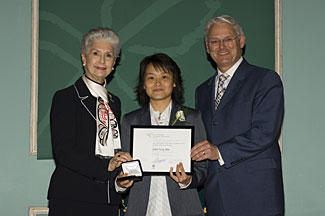 As a new immigrant, Esther Ho realized the need to integrate with her adopted community and face the challenges that entailed. To that end, in 2002, she worked tirelessly to found The Integration Youth Services Society. Esther’s dedication and creativity have been instrumental in the success of this non-profit organization, which has now served 2,000 people in the areas of education, personal growth, community outreach and cultural and recreational activities. Esther, together with her passion and dedication in working with children and their parents, epitomizes the spirit of volunteerism and is a role model for Chinese immigrants. 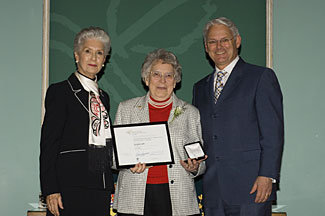 Geordie Salle serves her community in creative and caring ways. Geordie provided volunteer medical support for the region of Barriere for 23 years – treating everything from pneumonia to infections, delivering babies and buying a station wagon which she and her husband used as a local ambulance service. As a charter member of the North Thompson Fall Fair and Rodeo Association, Geordie has dedicated thousands of hours over the past 56 years to ensuring its success. She has helped to build homes for people in the area, has organized and fundraised at the Chinook Cove Hall, volunteered for the Barriere Curling Club and tutored in a Children’s Literacy Program. She is a role model for future generations of her community. 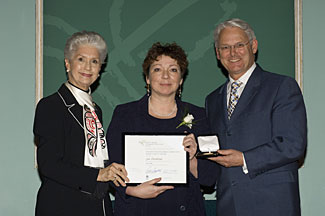 Dr. Christilaw has made a significant contribution as a highly regarded obstetrician-gynaecologist not only to the community of White Rock, but to the women of British Columbia and Canada. She is a caring physician, a skilled surgeon, superb mentor and strong social activist and a leader in her medical community. Her efforts to raise awareness of fundamental human rights, her active interest and support for preventative health care and her involvement in reaching out to the underprivileged and disadvantaged are examples of her passion and focus for helping others not only in her community but across Canada and internationally. 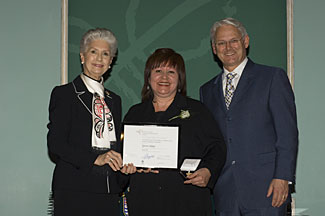 Yvonne Hopkins is an inspirational teacher of Aboriginal history, culture and traditional healing practices. For twenty one years, through her role as a volunteer teacher with many First Nations programs in the City of Vancouver, Yvonne has patiently and respectfully influenced thousands of Aboriginal people to pursue their educational and spiritual dreams. She is dedicated to the betterment of Aboriginal Nations in Canada and is described as a treasured cultural resource on traditional and contemporary Aboriginal healing practices. She has a gentle, loving way of helping her students feel proud of their cultural and historical heritage. 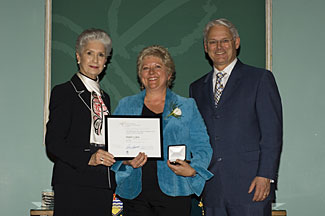 Marg Spina’s personal belief is that “everyone is given a gift in life, the challenge is to discover it, and to use it for the good of others.” A compassionate activist, Marg is committed to providing vital social services within her community through her strong leadership, innovation and fundraising. She founded the award winning Giant Steps West Therapeutic Society for autism, was President of the Thompson Crisis and Counselling Centre Board, and is currently the Executive Director of the Kamloops Food Bank, an organization to which she has successfully revitalized. Described as a highly respected member of her community and a person of integrity, Marg justly receives a 2006 BC Community Achievement Award. 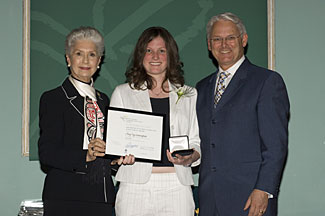 “Our school is a better place because of Amy Cunningham” writes her nominator, the principal of Dease Lake School. An exceptional young woman who leads quietly by example, Amy has served for three years on her Student Council while achieving honour roll status. She has spearheaded fundraisers, dances and theme days, and has been a Girl Guide leader where she devoted her time and energy to helping young girls become better citizens. She rolls up her sleeves and gets right down to work whenever there is need. Her courtesy and respectfulness set an example for other students. We commend Amy for her leadership and wish her well in her future endeavours. 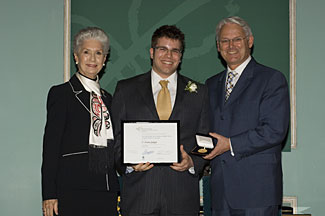 Simon Jackson is truly one of BC’s most gifted articulate, motivated and dedicated young men, a youth leader who has been featured in Time Magazine as one of the Heroes of the Planet. At 13 years old, Simon founded the Spirit Bear Youth Coalition whose efforts have successfully protected the spirit bear’s last intact habitat, the Great Bear Rainforest. He has inspired and acquired millions of youth supporters who have joined his organization. Simon is the Chair of the FORED BC Board of Directors which is committed to education about the environment and its natural resources and he is a dynamic speaker on sustainability issues worldwide. Simon is only in his early twenties but has proven already the “power of one”. 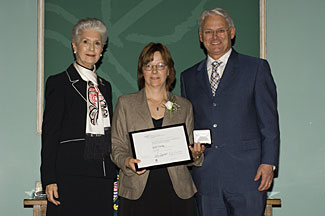 For over 30 years, Linda Tanaka has promoted arts and culture in the community of Salmon Arm. Under her guidance, the Salmon Arm Roots and Blues Festival has expanded from a five- act show in a concert hall to the largest multicultural festival in the interior, fostering tourism and providing tremendous economic opportunities for local business. Linda has also participated in the Salmon Arm Spinners and Weavers Club, the Salmon Arm Folk Music Society and the Salmon Arm Children’s Festival. Linda’s singularly strong vision has enriched not only the cultural but also the economic fabric of her community. 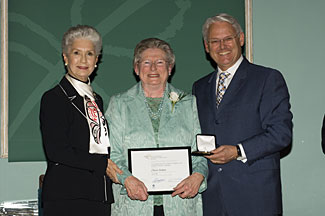 Anita Dadson has worked tirelessly for more than 30 years advocating for the development of community services for people with developmental and severe physical disabilities. She was instrumental in the establishment of the first children’s group home in BC. and helped found the North Shore Disability Resource Centre where she has held numerous positions. She is President of the Board of the Lionsview Seniors’ Planning Society, working on housing and transportation issues relating to seniors and the disabled community. She is a past president of the BC Association of Community Living and is current President of BC Family Network. Anita is a caring and committed individual who has worked and continues to work hard for the betterment of her community.