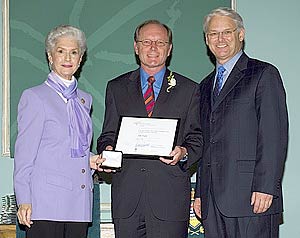 Jeff Dowle is an outstanding community leader in the business community of Vancouver. He has served for many years on the executive of the Vancouver Board of Trade and has led its Spirit of Vancouver campaign. Jeff is a strong supporter of the Leaders of Tomorrow Program which shapes the business, political and civic leaders of the future. Executive Vice President of HSBC Bank Canada, Jeff is also a founding council member of the Segal Graduate School of Business at Simon Fraser University. Further, Jeff has been and effective and respected contributor to the BC Children’s Hospital Foundation, not only as an active Board member and fundraiser but also as a past Chair of the Children’s Miracle Network Telethon. 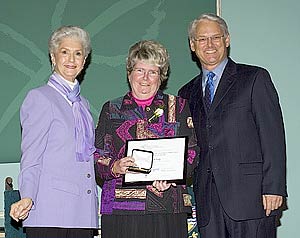 Laurae McNally has a long and distinguished history of dedicated service to the City of White Rock and the community of South Surrey. She has worked tirelessly in strengthening and building the community with her passion for people, education, sports and the underprivileged. She has volunteered on many community boards in the areas of civic improvement, arts and culture, health and child and family development. One of her major involvements is her over 20-year commitment as a trustee on the Surrey schoolboard where she has championed unique and innovative programs and promoted the well-being of students in the area. 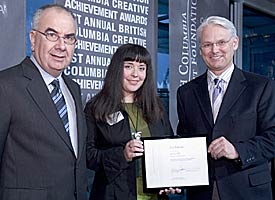 Erin Dolman creates unique jewellery pieces that combine natural objects such as dragonfly wings and feathers with vintage prayer cards and old photos. Each piece is comprised of at least three layers of sterling silver, copper, acrylic and hand carved, cast elements. Her work has been shown in Vancouver as well as the Sun Valley Arts Festival  in Idaho and the Bellevue Art Museum in Washington. Erin owns Holy Crow Designs and her work will be featured in the upcoming publication “500 Brooches.” 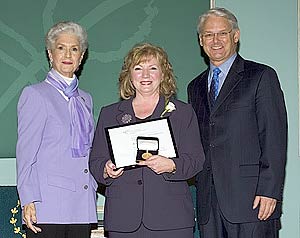 Maureen Enser is a spirited British Columbian deeply committed to her community and her work at the Urban Development Institute. As part of her work, Maureen successfully brings together the community with the development industry and promotes the industry’s goals of wise and efficient land use, healthy communities, sustainability and standards of excellence. Maureen was a driving force in the campaign that raised funds to provide emergency care and housing through the YWCA Crabtree Corner for women and children in Vancouver’s Downtown Eastside and she has served on the Downtown Vancouver Business Improvement Association and the Vancouver Resource Centre for the Physically Disabled. 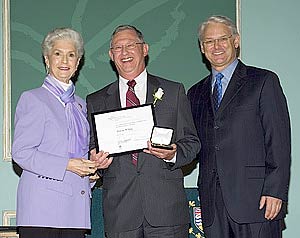 Bill McNulty contributes not to one community but to many: the City of Richmond, BC High School Sports, BC athletics, Athletics Canada, Rotary Club and the University of British Columbia. A Councilor for the City of Richmond since 1993, he is a visible and approachable community leader whose door is always open. He is passionate about sport and his vision includes the value sport brings to the community. As a coach, official and administrator, his contributions have been, and continue to be immeasurable. Bill has served as a member of the UBC Senate for fifteen years and president of the UBC Alumni Association. 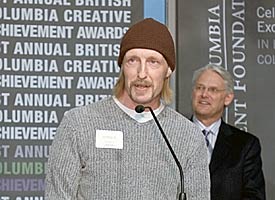 Vance Everitt is living proof that it’s never too late to start over. After a debilitating accident, Vance left his job as a mill operator to study at the Kootenay School of Arts. Since graduating, he has established Blackhaus Designs and is showing promise as a serious contributor to furniture and small object design. Drawn to both modernism and sculpture, Vance works primarily with wood, metal and acrylic, creating beautiful and functional pieces. His work has been shown in Kelowna, Vancouver, and the Kootenay Art Gallery, and was featured at the 2005 Interior Design Show in Toronto. 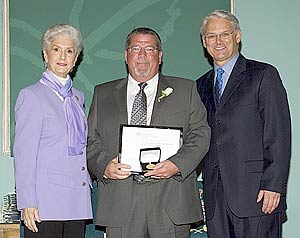 George Evans is honoured today for his truly remarkable achievements in assisting with the fire-ravaged communities of the North Thompson Valley. Without hesitation, Mr. Evans launched a relief effort out of his own business, organized a board of directors, lobbied national corporations and others for support, and oversaw the reconstruction of uninsured homes. Today, the North Thompson Relief Fund has raised $3.3 million in private donations. A tenacious leader, George continues to help rebuild the region serving on the Economic Development Advisory Commission for the North Thompson Valley. George is commended for his selfless contributions, considerable personal sacrifice and his untold hours of personal time and effort into helping the people of the North Thompson Valley. 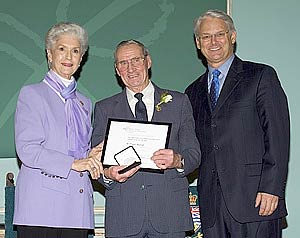 For over 30 years until his retirement in 2002, Bronco Moncrief served the community of Cumberland as Mayor. Bronco’s contributions have touched all aspects of the community including healthcare, seniors, arts and culture, recreation and economic development not only in Cumberland, but throughout the Comox Valley. Further, Bronco had dedicated 25 years as chair of the Cumberland’s special Empire Day celebrations. The mayor and council have said, ‘All of the citizens of the Comox Valley have benefited greatly from Mr. Moncrief’s tireless efforts’. 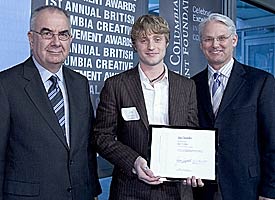 A graduate of the Emily Carr Institute of Art and Design, Jay Grandin takes a creative and innovative approach to applied art. With the furniture world under increasing pressure to generate environmentally friendly products, Jay began using low impact materials, allowing for easy disassembly, and interdependent design moves to reduce the environmental impact of production. Jay obtained his Bachelor of Design in May of 2004 and has recently worked as a furniture maker, a model-maker and is now in industrial design with Steelcase, the leading office furniture manufacturer. 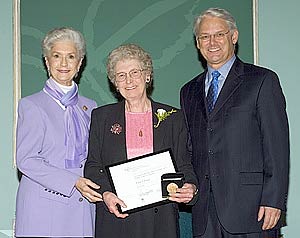 ‘Enid Fraser is an extraordinary volunteer because of her devotion to doing the right thing for thousands of others’, begins her nominator, Sister Kelliher of the Franciscan Sisters of Atonement. For thirty-two years, Enid has selflessly volunteered every Thursday to help in the downtown Eastside by making hundreds of sandwiches for residents of the area. She also supervises other volunteers in a positive and pleasant manner. Enid’s compassionate spirit and willingness to help extends to other areas of community life, including shopping for the elderly, teaching English to immigrants and assisting families in her area in need.