This year’s Crabtree McLennan Emerging Artist designation in First Nations Art was presented to Crystal Behn, an artist of Dene and Carrier ancestry, for demonstrating excellence in the early phase of her career.

Crystal, an artist from Fort Nelson First Nation, learned the art of beading, moccasin making and traditional harvesting as an adult. When her mother passed away, Crystal realized the beading tradition her mother had engaged in had to be carried on, so she took it upon herself to learn the art and her culture from her grandmother. But first she made sure she was addiction-free  so she could start focusing on her art and her culture under her grandmother’s direction. “I was over there as much as I could, absorbing as much culture and tradition as I could. She was always encouraging me and giving me the opportunity to learn.”

“I learned a lot in a short period of time. I sat with my grandma every day on the couch, beading. It was such an honour to sit there and have that time with my grandma because now she’s gone,” Crystal says in her interview with CBC’s Sheryl MacKay.

And now, Crystal is passing on her teachings to her own seven-year-old daughter. “Teaching her is one of the most important things to me. Seeing my daughter pick up beads and knowing she’s going to keep it going is the most amazing feeling.”

Working with these materials gives Crystal an important connection to the land and reflects her commitment to honouring the process that goes into creating the hide from hunt to finished art piece.

Whatever she can envision, she makes and that pushes her to keep creating and passing on her traditions. She is now teaching others as the Indigenous Programmer at Two Rivers Gallery in Prince George, where she works on small projects with the community. Crystal is one to watch as she continues her beading journey. See her work on social media at IG: @InherFootstepsdenedesigns or on FB: @InHerFootsteps AuthenticDeneDesigns 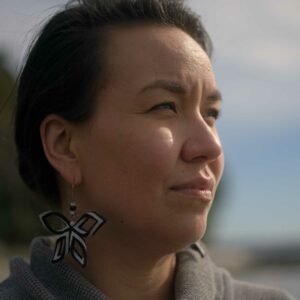 An artist of Dene and Carrier ancestry, Crystal Behn specializes in traditional and modern beadwork that is both customizable and unique. Born and raised in Treaty 8 territory, Crystal learned the art of beading, moccasin making and traditional harvesting from her grandmother. Crystal uses as many different natural materials as…