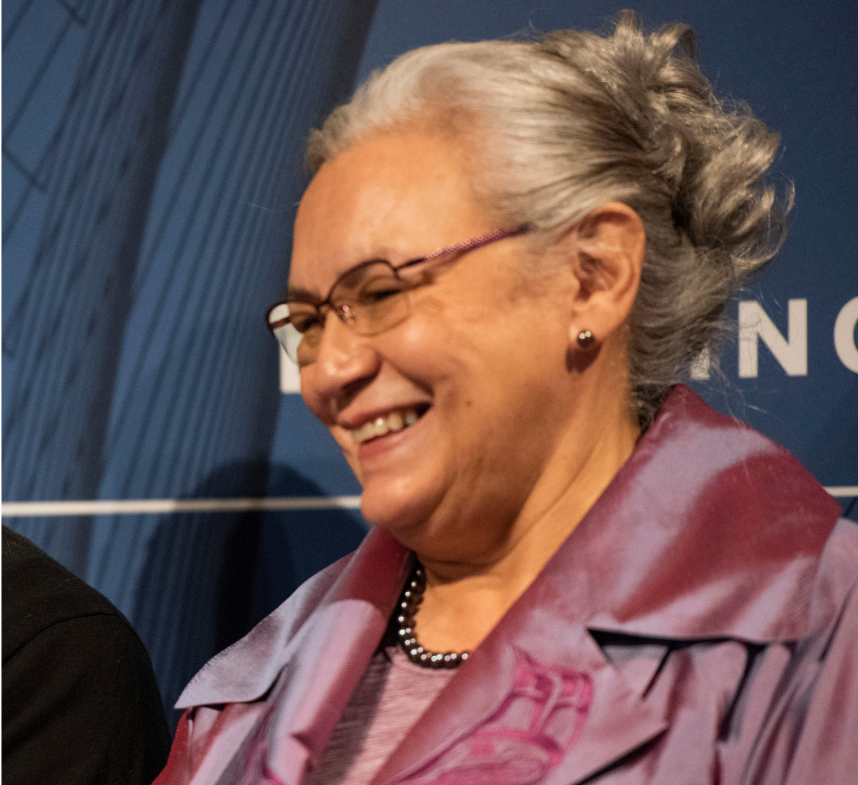 Director, BC Achievement Board and BC Reconciliation Award Organizing Committee Member

Sophie Pierre is an Indigenous leader and served as Chief of ʔAq̓am near Cranbrook for 26 years. She was the Chief Commissioner for the British Columbia Treaty Commission (2009 – 2015) and was instrumental in the formation of the Ktunaxa Kinbasket Tribal Council in the 1970s and subsequently, served as the administrator for 25 years. Sophie was awarded the 2003 National Aboriginal Achievement Award in Business, which recognized her strong commitment to the economic development of her community. In 2016, she was appointed to the Order of Canada and was named to the Order of British Columbia in 1994. She has received Honorary Doctorates of Law from the University of Canada West, the University of British Columbia and Simon Fraser University. In 2013, Sophie was awarded the BC Aboriginal Business Individual Achievement Award.

Why is now the time for the British Columbia Reconciliation Award?

The answer to ‘why now?’ is ‘if not now, then when?’. I firmly believe that when things happen, they happen for a reason – there is a greater plan in place. This type of initiative is happening now when it is most meaningful for all the citizens of British Columbia and when it can have the greatest impact. Now is the time!

What is the significance of the partnership between the award program’s presenting organizations: The Office of the Lieutenant Governor of BC and BC Achievement?

Recognition based on achievement and good work reflects positive progression. With the Lieutenant Governor representing the Crown in our province, Her Honour’s role in the partnership signals that this program is more than just an award – it goes to the underlying question about the history of the Crown in Canada and specifically in our province. It continues the journey of truth and reconciliation for all citizens of the province. BC Achievement’s mission to elevate excellence and inspire achievement makes it the perfect partner to support the delivery and impact of the BC Reconciliation Award program.

You’ve stated that the mission of BC Achievement is to elevate excellence and inspire achievement – can you explain a bit further how this applies to the BC Reconciliation Award?

BC Achievement uses recognition as a tool to shine the light on excellence and inspire others to do the same. Communities need to look at their actions and showcase their reconciliation practices. It’s almost like a peer review when communities look within and then lift each other up. There are several representations of reconciliation and the models are out there. Recognizing those who rise to the top will allow others to learn from each other and adopt each other’s best practices. We tend to shy away from recognition, but it is so important as communities learn and see the benefits that come from the good work within their own communities.

What is the anticipated impact of the program? – How do you see the Honourable Steven Point’s vision actualized through the program?

As I mentioned in the previous question, communities can learn from each other – all BC citizens can learn from each other. The lessons of reconciliation are there within our own backyard and, as His Honour reminded us, “we need to create a better understanding amongst all people that we are in the same canoe. No matter where you are from, we all need to paddle together.” I feel that the impact will develop organically and have a natural spin off from the recognition process– there will be a life to it. As we learn of all the reconciliation activities taking place and all the possibilities to further the journey – we have the opportunity to make the Honourable Steven Point’s dream a reality.

What’s your message to British Columbians as to why they should nominate someone for a BC Reconciliation Award?

First of all, I cannot say enough about how grateful I am to those who do nominate – for all BC Achievement’s programs. And I thank them. We need these champions who take the time to tell these stories of excellence and nominate worthy individuals and organizations for the BC Reconciliation Award. I also think that all British Columbians are pretty damn special – and need to be recognized! It is one of the hardest things to acknowledge when you’ve accomplished something notable, yet it is so important. We need to collectively blow our horns to lift up our communities. The momentum created will then take on a life of its own! #nominatenowbc

For more information on the British Columbia Reconciliation Award, or to nominate, you can go to bcachievement.com. Nomination deadline is January 15th, 2021.