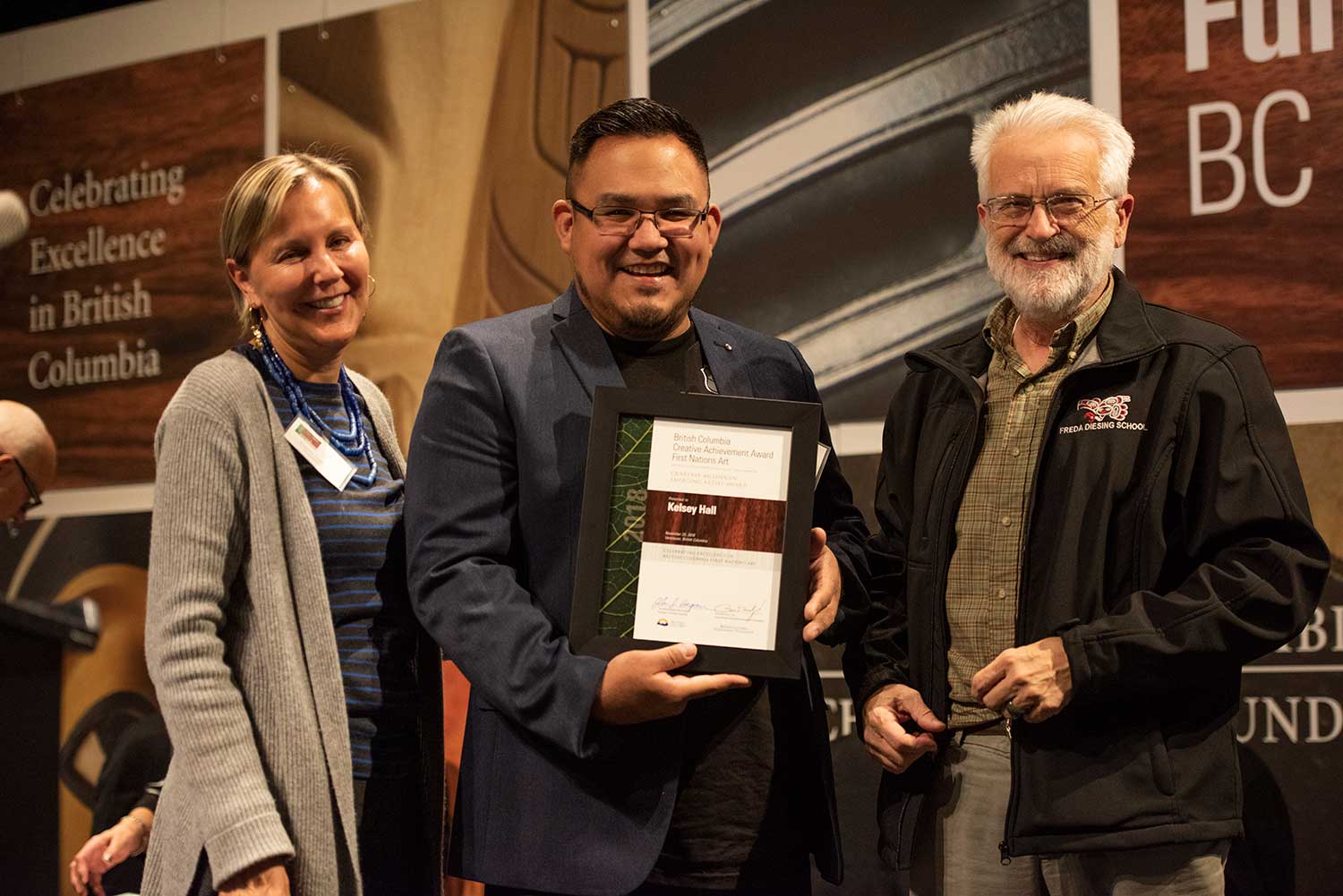 “Within art, there is no time when traditions stop or start – there has been a gap in the timeframe of rebuilding Northwest Coast art – but now artists are making new and more powerful statements and the vitality of their work is on display here tonight – it has the connection and it has the artist behind it – this is a phenomenal thing”.  Bill McLennan, Fulmer Award Artist Talk, November 2019

Bill deeply and intimately understood the cultural and historical connection between Northwest Coast Art and First Nations identity. He devoted his career to revealing this connection and its importance. So much so that it became his personal passion and quest to repatriate art pieces back to their respective ancestral homes. At a November 2019 BC Achievement Fulmer Award Artist Talk, Bill shared how it is an obsession for him to track down this missing art from museums and collections all over the world:

“I am a bit obsessive – in October (2019) I was back in Montreal in meetings with a foundation that supports MOA. On the last day after the meetings, I got up at 5:00am and took the train to Toronto – then the subway to the Royal Ontario Museum. There, I photographed, in infrared, the pieces that I missed 30 years ago. Northwest Coast Art is spread all around the world – so, unfortunately – these pieces are not (yet) making their way back to their home communities. There are more and more cultural centres which can house the art but just tracking these pieces down and finding ways that other artists can find them – it is so important. It is what I think about all the time – where can I find them”?

Every step of Bill’s career took him further along his quest, beginning with the Image Recovery Project which he started in 1980 at the UBC Museum of Anthropology (MOA). He discovered that taking photographs using infrared film could reveal Northwest Coast paintings that had disappeared under the patina of age. What came out of this research was the book, “The Transforming Image: Painted Arts of Northwest Coast First Nations” by Bill and his MOA colleague Karen Duffek. It became a guide for many Northwest Coast First Nations artists as they discovered their artistic identity. Tsimshian artist Phil Gray (2014 Awardee) labelled the book as a ‘game changer’ for artists as it allowed them to be able to see photographs of their ancestors’ work that revealed a design style that was a disciplined and strict art form. He said, “it was like having a thesaurus with you at all times” and shared its impact on his artistic development:

“I really studied it – I wanted to be more than just be a Northwest Coast Native Artist – and, I was able to understand my Tsimshian identity. ‘Transforming Images’ gave me pride as I had never seen any representation of Tsimshian art before”.

Bill’s advocacy for repatriating First Nations Art to its rightful communities permeated his daily world and he framed his quest with stories and narratives which outlined the connections between art and culture:

“The removal of all these artifacts was the physical removal that connected families to their histories. So, it was much more than just a really nice bowl – it connected to all the families who had ever used it – it had the history built into it in at a potlatch or a feast – it had all this knowledge embedded into it and then it was basically taken away. These pieces left the Northwest Coast and became something else in different communities in Europe – but they are the history of the Northwest Coast. These pieces need to come back because of the knowledge imbedded within them and can be extracted by current day artists – creating sense of identity for them”.

Bill took pride in celebrating First Nation Art in BC while supporting emerging and established artists and he did so with an unrelenting dedication and quiet determination. He seemed able to make time for everyone and injected a warm and quick sense of humour into all his conversations. For over 15 years he was a committed advisor, friend and inspiration to BC Achievement’s First Nations Art program and the foundation is so grateful for his willingness to share his vast knowledge. His sage and passionate voice along with his kind and thoughtful nature will be much missed but his repatriation quest and its legacy will continue. Thank you, Bill.

In lieu of flowers, Bill’s family has asked for donations to the Downtown Eastside women’s shelter. When Bill retired from MOA, a scholarship was established in his name at the Freda Diesing School of Northwest Coast Art, and this is another option for honouring his memory.