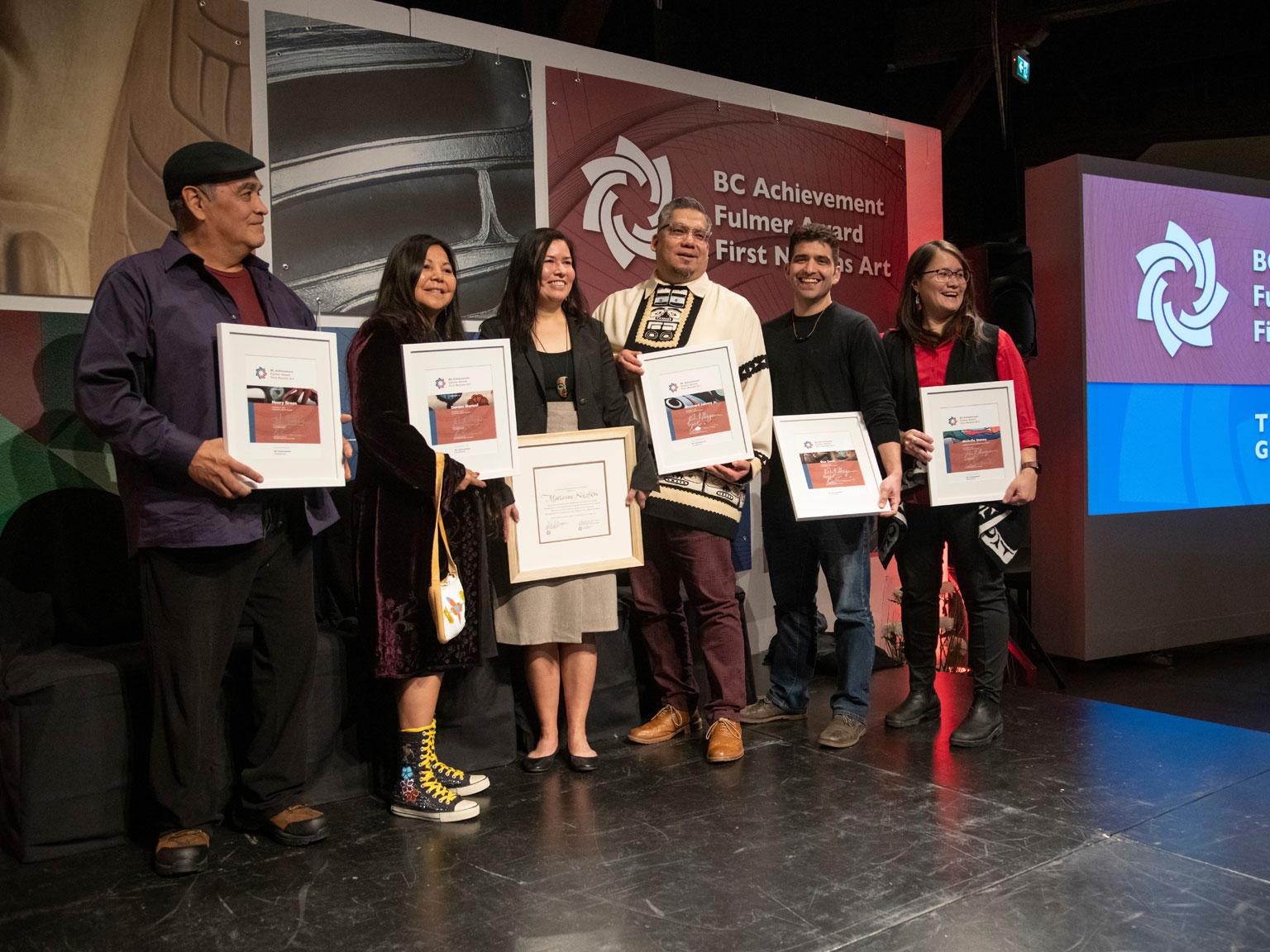 “BC Achievement is honoured to showcase these artists whose respect for tradition directs and inspires their creative practices,” said BCAF chair Anne Giardini. “The 2019 awardees join 73 artists from the program’s past 13 years. Together, Fulmer Award alumni ensure British Columbia is a place filled with innovation and wonder,” she added.

The 2019 recipients, chosen by an independent jury are:

In addition, Marianne Nicolson, Musgamakw Dzawada̱’enux̱w, received the 2019 Fulmer Award of Distinction which recognizes individuals who have made a profound contribution to their First Nations culture.

This year’s celebration of the Fulmer Award included a public showcase of the awardees’ art at The Roundhouse from November 18th until 21st, 2019. BC Achievement thanks its venue partner, The Roundhouse, event partner, Denbigh Fine Art Services, media partners, The Georgia Straight and Global TV, Gallery Partners, Coastal Peoples Fine Arts Gallery, and wine partner, Indigenous World Winery for their support of this exhibition and the work of BC Achievement.

Members of the 2019 jury include:
Philip Gray, a past recipient and Tsimshian artist; Lou-ann Neel, Repatriation Specialist at the Royal BC Museum and an Mamalilikulla and Kwakwaka’wakw artist; and Connie Watts, Emily Carr University Aboriginal Program Associate Director and artist of Nuu-chah-nulth, Gitxsan and Kwakwaka’wakw ancestry.

Special advisors to the jury include Emily Carr University Aboriginal Program Director, Brenda Crabtree, a member of the Spuzzum Band with both Nlaka’pamux and Sto:lo ancestry; and the UBC Museum of Anthropology’s Curator Emeritus, Bill McLennan.

The BC Achievement Foundation is an independent foundation established in 2003 to celebrate community service, arts, humanities and enterprise. For information on BC Achievement, visit www.bcachievement.com.

The Fulmer Award in First Nations Art is made possible through the generous support of the Vancouver-based Fulmer Foundation.

Detailed information about the 2019 recipients and a list of past awardees is posted on the foundation’s website at www.bcachievement.com.

Marianne Nicolson ‘Tayagila’ogwa is a well-known mixed media artist who utilizes painting, photography, mixed-media, sculpture, and installation to create modern depictions of traditional Kwakwaka’wakw concepts.
As an artist of Musgamakw Dzawada’enuxw First Nations descent, Marianne’s training encompasses both traditional Kwakwa̱ka̱’wakw forms and culture and Western European based art practice. She has exhibited widely in Canada and throughout the world since 1992 and has been vocal on issues of Aboriginal histories and politics arising from a passionate involvement in cultural revitalization and sustainability. Her work, A Lament for National Histories, questions the status of international agreements/treaties and the land jurisdiction these agreements reflect.

Gus Cook is a respected repoussé and chasing artist from the Namgis community, which is part of Kwakwaka’wakw nation. Repoussé and chasing are ancient techniques which involve forms of sculpting 3-D pieces out of flat sheet metal by hammering both sides of the metal. From a young age, Gus was encouraged by his mother and father to work hard, be proud and take care of his surroundings. Mentored closely by his brother and fellow artist Rande Cook, Gus has combined skill and artistry with his work ethic, to create beautiful jewellery, frontlets, rattles, spoons and plates.

Tsm’syen artist Wii Gwinaalth, (Henry Green), has an extensive record of multi-disciplinary practices in a variety of mediums and has been involved in local and international exhibitions. Henry’s art embodies a spiritual process and his work is guided by blending Tsm’syen mythology with historical, ideological and modern references. He credits Haida artists Freda Diesing and her nephew, Don Yeomans, for stimulating his interest in the arts and in woodcarving. Henry’s artistic practice includes the training of over 400 apprentices and mentoring many young artists, therefore ensuring the continuance of Tsm’syen cultural knowledge and traditions for future generations.

Coast Salish artist, Maynard Johnny Jr., has been drawing portraits of his family and replicating comics since early childhood. His exploration of First Nations Art began at age 17 when he designed and created his first painting on a seven-foot by three-foot door skin panel. Primarily self-taught, Maynard has been influenced by accomplished artists and has expanded his reach significantly, designing logo and identity pieces for organizations, movie sets and television series. An internationally recognized artist, Maynard’s work continues to share the beauty of Coast Salish art through graphic painting, wood, glass, large metal sculptures and precious metals.

A member of the Neskonlith First Nation, Doreen learned traditional beading from her grandmother. Her mother was also an intricate bead artist who taught Doreen that she should learn to bead well so she could use her work, when necessary, to provide for her family. Now Doreen beads for her love of the art, carrying on the legacy of her traditions with future generations. Doreen is the sixth child of Grand Chief Dr. George Manuel and spiritual leader Marceline Manuel and comes from a long line of Indigenous oral historians and storytellers.

The recipient of this year’s Crabtree McLennan Emerging Artist Award, Michelle Stoney incorporates the traditions of her two distinct First Nations cultures: form line from her Gitxsan heritage and bright colours with black outlines from her Cree heritage. Recently painted murals in her hometown of Hazleton, as well as in Terrace and Vancouver reflect Michelle’s innovative painting style as well as her goal to create unique First Nations art. In addition, Michelle has been learning the fundamentals of jewelry-making from established artists and contributing positively to the future of First Nations Art.